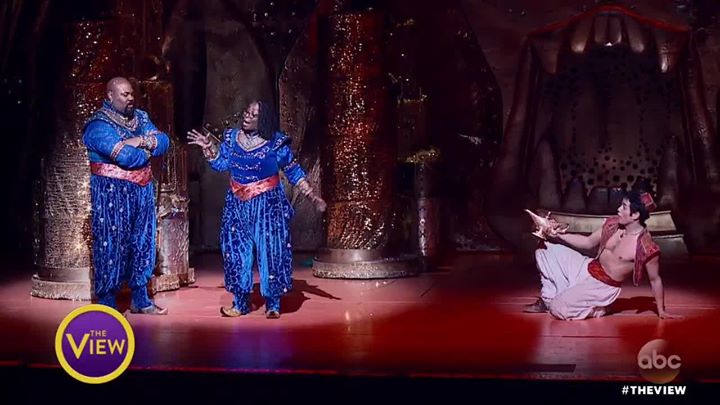 She discovered A WHOLE NEW WORLD on Broadway making wishes come true. Award winning actress and comedian made a one night only cameo appearance in Disney’s Award winning show Aladdin – The Musical as the “Other Genie” in an improvise sketch with it’s Tony winning star James Monroe Iglehart (who is set to depart the show next month). Check out the Behind the Scenes fun of Goldberg gearing up for that one night only performance at the New Amsterdam Theatre as seen on The View.

This is not Goldberg’s first time making a Broadway cameo appearance. In 2010, she made a one night only appearance playing multiple roles in Disney’s longest running Award winning smash The Lion King – Musical. In that, she appeared as a “bird lady” (during the show’s iconic opening number CIRCLE OF LIFE), reprised her performance of “Shenzi” (which she voiced in the 1994 animated film) during a scene in the Elephant Graveyard, and even went swinging in the trees as the “Other Rafiki”. It was also shown on The View.

How funny is Whoopi?!!

She’s back on Broadway! Whoopi Goldberg took the stage for one special performance to send off our Tony award-winning Genie, James Monroe Iglehart, on The View.