NO WAY!!!! We at New York Broadway Tours and almost everyone in the Theater community is going crazy over the new GIRL POWER sensation better known as SIX. The British smash hit is already causing a sensation in the UK, North America, and now the Queens are set to bring their DIVORCED, BEHEADED Tour now to Australia!!!!

The Australian premiere of SIX will be coming Sydney playing the legendary Sydney Opera House beginning in 2020. Official dates will be announced soon.

The Australian debut of SIX (the ultimate pop concert experience telling the story of the six EX-WIVES of King Henry VII dealing with their lives from hell with him) comes during a crazy amount of news that has been lined up for the show's future. Along with the show's success at London's Arts Theatre Off-West End, a new UK tour is scheduled to launch this Fall 2019.

The show closed off its North American debut production last night in Chicago, IL at the Chicago Shakespeare Theater. However thanks to popular demand, the Queens will be returning to the Windy City beginning July 8th, 2020 this time playing the Broadway Playhouse.

It's upcoming North American legs will include…

From there, the biggest gig of them all…. SIX will make its way to rule our very own kingdom of Broadway (here in New York City) playing the Brooks Atkinson Theatre. Previews are set to begin February 13th, 2020 and Opening Night scheduled for March 12th, 2020.

Are you excited for the hottest ticket right now bringing GIRL POWER the world?

The surprise smash of the 2017 Edinburgh Fringe, Six, will premiere at the Sydney Opera House in January.

BREAKING NEWS: ABC has just joined the lineup of channels brining back the old tradition of doing Live TV musicals. It has just been announced that the channel teaming up with The Wonderful World of Disney will be presenting a live televised production of the beloved classic hit The Little Mermaid. It's scheduled to go live on November 5th, 2019 at 8pm on ABC. In addition, the first of casting has been announced. Headlining this new live production will feature an all-star cast consisting of….

Grammy and Emmy winning and Oscar nominee Queen Latifah as the wicked evil seawitch herself "Ursula",

THE LITTLE MERMAID LIVE is based on the Hans Christian Andersen fairy tale and the beloved Oscar winning 1989 Disney Animated film of the same. It tells the iconic story of a young mermaid who dreams of life in the world above the sea and takes a sacrifice to win the heart of the handsome prince. With an iconic score by Alan Menken and the late Howard Ashman, it features some of the most beloved songs written for both the screen and the stage including PART OF YOUR WORLD, POOR UNFORTUNATE SOULS, and the Oscar winning UNDER THE SEA. In addition, the live TV presentation will feature the newer songs that were written for the stage musical production written by Menken and Glenn Slater including THE WORLD ABOVE, IF ONLY, HER VOICE, BEYOND MY WILDEST DREAMS, and more.

With the triumphant of the original 1989 film and Disney making its mark on the Great White Way, Disney on Broadway president Thomas Schumacher was planning to adapt THE LITTLE MERMAID for the stage. After reaching out to the original composer Alan Menken and figuring out many ideas to create the effects of everyone portraying mermaids and fish under the water, Schumacher and team Disney reached out to Francesca Zambello (known for her direction work in the opera). Based on her ideas in the opera, she created the show in a very unique way of no water, no wires, and no flying 15 actors all at once… using translucent materials to create abstract shapes and manipulate light to give the watery illusion. To expand more of the story and to add new music, Menken hired Glenn Slater (who he previously worked on the Disney film Home on the Range) and Doug Wright. In addition, Stephen Mear was hired as choreographer which he came with the idea of having the actors wear Heelys wheeled footwear, dubbed "merblades", while tails on sprung-steel rods, designed by Michael Curry, were attached to their hips.

The show had its world premiere pre-Broadway tryout in Denver, Colorado back in the Summer 2007 at the Denver Center for the Performing Arts which it sold out the entire run. From there, it officially arrived on Broadway at the Lunt-Fontanne Theatre in Christmas of that same year where it ran for 50 previews and 685 regular performances. With Francesca Zambello's direction and Stephen Mear's choreography, the cast consisted of….

THE LITTLE MERMAID was nominated for 2 Tony Awards in 2008 for Best Score and Best Lighting Design of a Musical. However, it lost both the categories.
.
Following its life on Broadway, THE LITTLE MERMAID began a life with revamped and reinvented production that premiered in Holland back in 2012. This new production was directed by Glenn Casale and was noted for flying the actors above the ground. He also changed majority of the score and book including a new song about the relationship between "King Triton" and "Ursula". With the success of the Holland reinvented version, THE LITTLE MERMAID began touring all over North America and all over the world. It's being performed today in schools, community, and regional theaters everywhere.

In addition to this live TV production, a full scale live action feature film version of THE LITTLE MERMAID is also set to start filming in 2020.

Who is excited about this new live production of THE LITTLE MERMAID?

ABC has just announced that THE LITTLE MERMAID LIVE will air Tuesday, Nov. 5 at 8 p.m. as part of The Wonderful World of Disney. Auli'i Cravalho, of Moana fame, will star as Ariel. Queen Latifah will star as Ursula and Shaggy will play Sebastian. No additional casting has been announced at this time…

ON THE STREET YOU LIVE IN, WE GREW ACUSTOMED TO HER FACE and now she’s gone!! Today i 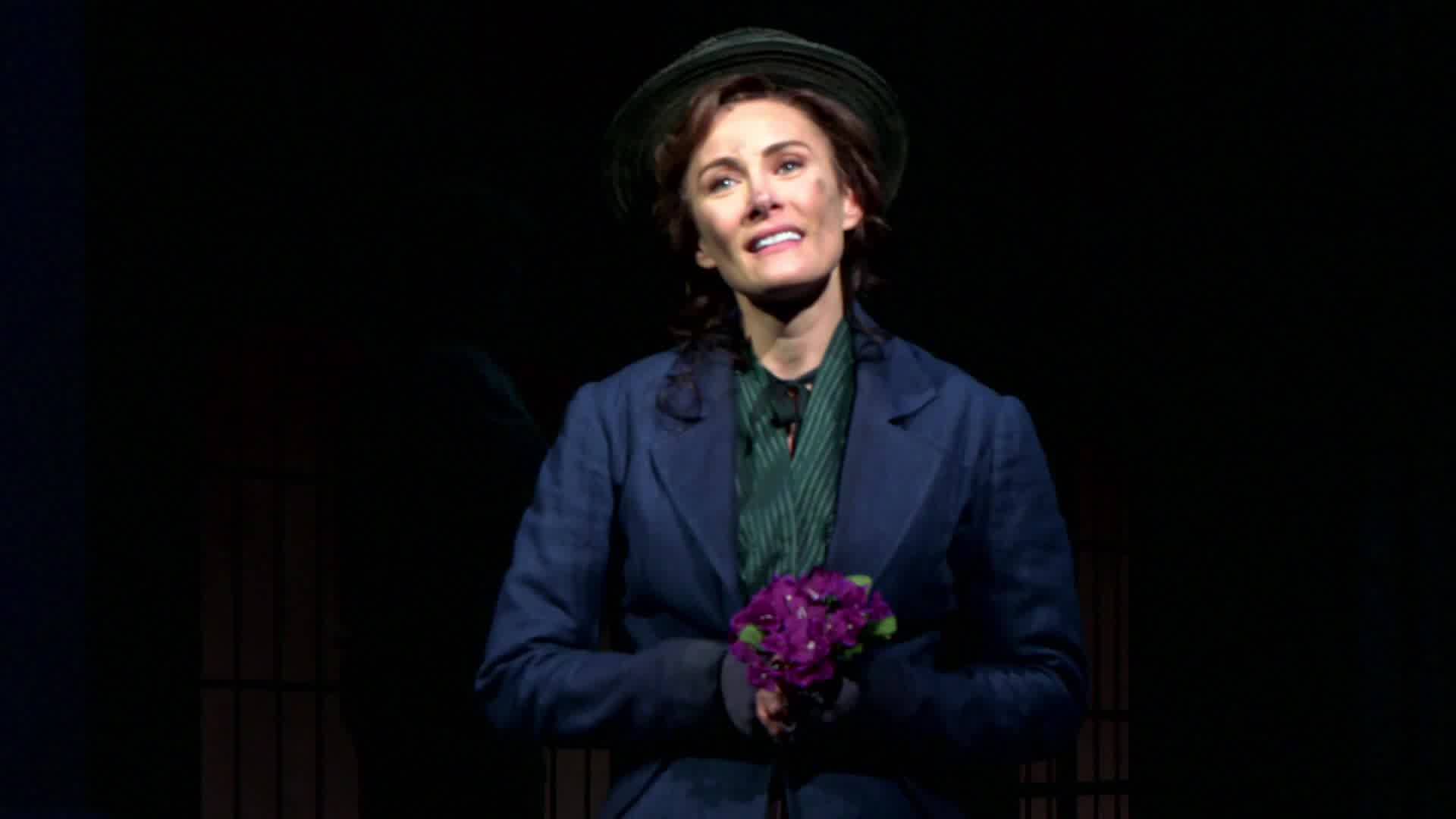 ON THE STREET YOU LIVE IN, WE GREW ACUSTOMED TO HER FACE and now she’s gone!! Today is a very bittersweet and not so LOVERLY day for the Theater community as Bartlett Sher‘s Award winning Lincoln Center Theater revival of the legendary Lerner & Lowe classic My Fair Lady on Broadway (starring Tony…

EVERY STAR OUT IN HEAVEN IS SHINING DOWN ON BROOKLYN once more!!! In celebration of the 15th Anniversary of its World Premiere, the cult-classic pop, rock, soulful, and street urban musical BROOKLYN will make its long awaited UK PREMIERE this Fall at the Greenwich Theatre in London (OFF-WEST END). It is expecting to run there for a strictly limited engagement from September 27th – October 16th, 2019. To give UK fans a sneak peak, the new cast took center stage in London's Trafalgar Square during the free West End LIVE performing the show's opening number HEART BEHIND THESE HANDS.

Under the direction of Adam Haigh, the UK premiere cast will feature….

Hiba Elchikhe ("Princess Jasmine" in the West End production of Disney's Aladdin – The Musical) in the title role of "Brooklyn",

Sabrina Aloueche (West End's We Will Rock You UK and Les Miserables – Musical) as "Faith".

and Andrew Patrick-Walker (West End and Toronto's Bat Out of Hell – the Musical) as "Streetsinger" / "Narrator".

In addition, Jodie Beth Meyer will serve as the alternate for the role of "Brooklyn".

For those who may not know, BROOKLYN tells the story of a young girl from Paris named "Brooklyn" who becomes an acclaimed singing superstar and discovers the father she never knew in the city that bares her name. The musical uses the "play within a play" format with the actual story being told by 5 street corner and homeless musicians living under the Brooklyn Bridge. The show features a score and book by Mark Schoenfeld and Barri McPherson (inspired by their real life stories). It features some of the most beloved songs written for the stsage including ONCE UPON A TIME, RAVEN, STREETSINGER, BROOKLYN IN THE BLOOD, and more.

The show originally spent 2 years of early development labs (consisting of readings and workshops). With the green light to go, BROOKLYN had it's World Premiere Pre-Broadway tryout at the Denver Center for the Performing Arts in 2003. It officially arrived on Broadway in 2004 at the Gerald Schonefeld Theatre playing a complete total of 311 performances. Under the direction of Jeff Calhoun, the cast consisted of….

The show was snubbed with no Tony Awards nominations in 2005.

Following the Broadway run, the show went on a US National Tour starring….

and Lee Morgan as "Taylor Collins".

Most recently, Broadway Licensing just secured the rights to BROOKLYN. It will now be performed in numerous schools, community, and regional houses everywhere.

GOOD MORNING BROADWAY FANS! We have more exciting toe-tapping performances coming your way on our TOP 40 TONY AWARDS COUNTDOWN. It is just 5 DAYS AWAY till Broadway's biggest night of the year…. The 73rd Annual Tony Awards. Are you ready for another icoinic performance?

At # 5 on our countdown is one of Broadway's hottest, dark, haunting, beautiful, and emotional shows. It follows the dark tale of a young High School outcast who finds himself in the center of something that was not to be seen by the Public and a lie that was never meant to be told. This is Dear Evan Hansen. The show features a score by Benj Pasek and Justin Paul along with a book by Steven Levenson.

From the 2017 telecast, Tony winner Ben Platt in the title role and the original cast perform one of the show's beloved anthems for all underdogs…WAVING THROUGH A WINDOW.

DEAR EVAN HANSEN was originally inspired by a real incident from Benj Pasek years in High School where a troubled teenager was found dead due to drug problems and all of a sudden, he had more mourners in death than friends in real life. The incident always came back to Pasek, he along with his collaborator Justin Paul began to create a full musical inspired by that tragic event. They decided to tell the story following an outcast with social anxiety and mental illness be in the center of it all. The show was then passed on to director Michael Grief who fell in love with the piece. From there, the show went through many years of readings and workshops.

The show originally premiered in 2015 at Arena Stage in Washington D.C. before making its way Off Broadway playing Second Stage Theater in the Spring of 2016. The response of the Off Broadway run was well received by critics and audiences, the show was then transferred to Broadway?s Music Box Theatre before becoming one of Broadway?s most popular hottest tickets. The show continues to sell out every night on Broadway. Under the direction of Michael Grief, the cast consisted of?

Will Roland (later and currently Sky Lakota-Lynch) as ?Jared Kleinman?,

and Michael Parks as ?Larry Murphy?.

The show was nominated for 9 Tony Awards in 2017 winning 6 including Best Musical, Best Score (for Pasek and Paul), and Best Leading Actor in a Musical (for Ben Platt).

Along with Broadway, DEAR EVAN HANSEN is currently playing to packed houses all over North America with its current National Tour and a sit-down run in Toronto, Canada (ending later this summer). The show will make its UK Debut in London's West End beginning this Fall.

Doesn?t this show make you really care for the underdogs who feel like they don?t have a voice?