DRINK WITH ME TO DAYS GONE BY! Check out the historical, bittersweet, and emotional final bows for Trevor Nunn and John Caird's first and last standing original "revolving" production of THE WORLD'S LONGEST RUNNING SHOW IN WEST END HISTORY…. Les Miserables – Musical after 34 years at the top. Following the final bows, Dean Chisnall (who stars in the iconic lead role of "Jean Vailean") and the company led the sold out crowd in a toast to celebrating the legacy of this iconic production and it's wonderful journey going from London's Barbrican Theatre to the Palace Theatre, and now the Queen's Theatre. The show closes for its home at the Queen's Theater about to go under a full-scale renovation.

During the 4 months the Queen's (soon to be renamed the Stephen Sondheim Theatre) is being renovated, LES MISERABLES will be performed next door at the Gielgud Theatre as an All-Star semi-staged concert production running for 16 weeks only from August 10th, 2019 – November 30th, 2019. Following that engagement and when the renovation is complete, the musical will reopen in the Queen's on December 18th, 2019 with Cameron Mackintosh Ltd and Laurence Connor's critically acclaimed NEW production (initially made for the show's 25th Anniversary back in 2010) that continues to play all over the world (including right now on tour across North America, the United Kingdom, and Asia).

Bravo, Congrats, Au Revoir to the iconic original production of LES MISERABLES that has inspired audiences to DREAM THE DREAM for the past 34 years. Shout out to the cast, musicians, crew, musicians (all past and present), and the creative team.

Who is sad to see an iconic production end? 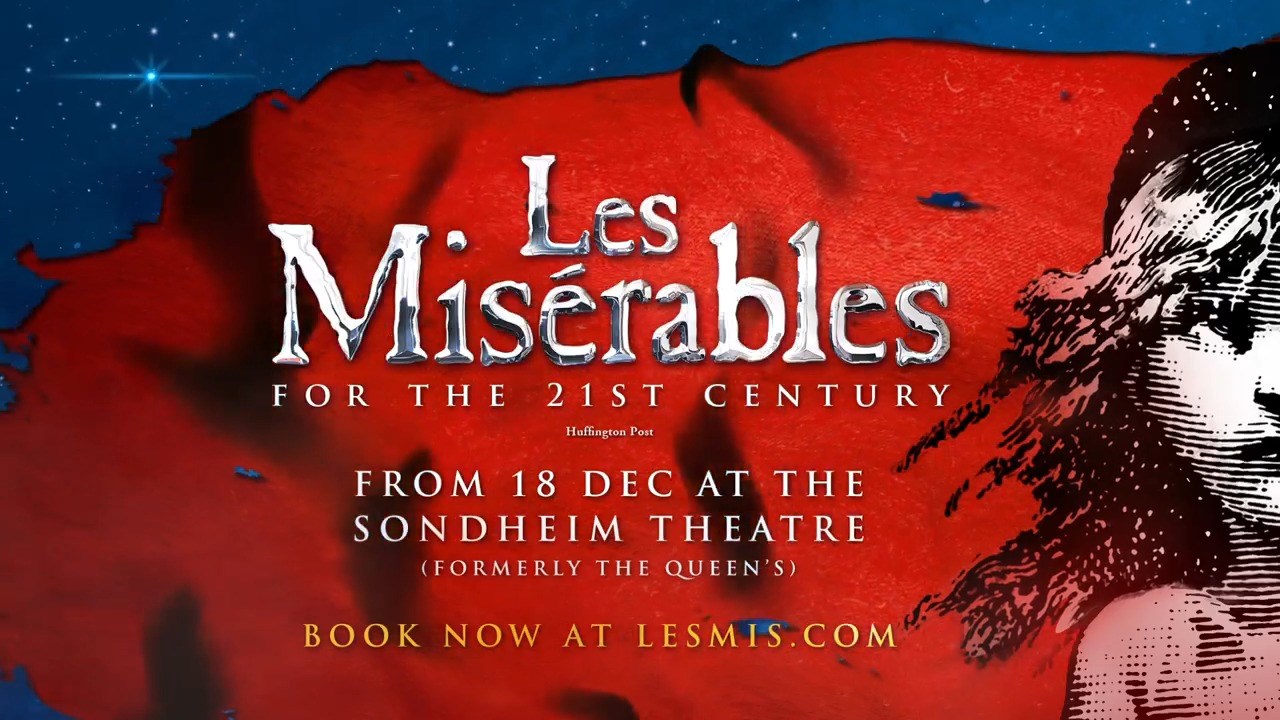 FIRST LOOK: Check out the all new trailer of the New Production of Les Miserables – Musical heading into the West End for the very first time this Holiday season. This trailer features footage of the current UK and Ireland Touring cast led by Killian Donnelly as "Jean Vailjean", Katie Hall as "Fantine", and more.

As previously mentioned, last night was a bittersweet and emotional day for Theater history as Trevor Nunn and John Caird's first and last standing original production (yup, known for its famous revolving set) ended its historical run in London's West End after 34 years and over 15,000 performances of DREAMING THE DREAM as THE WORLD'S LONGEST RUNNING SHOW IN WEST END HISTORY. Like we've said, it's not over for LES MISERABLES' time in London. The show's home at the Queen's Theatre (which by the time this new production opens, it will be renamed The Stephen Sondheim Theatre in honor of the iconic composer's upcoming 90th Birthday) will be going under a 4 month renovation expanding the lobby, building more restrooms, the backstage area, and the auditorium.

During this interim, LES MISERABLES will re-open next door at London's Gielgud Theatre with a semi-staged All-Star concert production playing for a strictly limited run of 16 weeks only from August 10th, 2019 – November 30th, 2019. With a full cast and 65 piece orchestra, this new production will be led by Alfie Boe and John Owen-Jones alternating in the role of "Jean Vailean", Michael Ball OBE as "Inspector Javert", Carrie Hope Fletcher as "Fantine", Matt Lucas, as "Thernadier", and more.

From there beginning December 18th, 2019, the new production (created by Sir Cameron Mackintosh Ltd and directed by Laurence Connor back in 2010 for the musical's initial 25th Anniversary and is now being performed all over the world including having made a stop on Broadway in 2014) will officially open. For this production, it's well known for incorporating a mix of old elements from the original staging (including certain set pieces and costumes) plus new elements (including an LED screen projections incorporating original paintings from the novel's writer himself…. Victor Hugo). No casting for the new cast debut in the West End has been announced yet.

Who is excited for a whirlwind year of MIZery and hearing the people sing?

Who already misses the original staging?

As previously announced, Trevor Nunn and John Caird's legendary original London production of the iconic Les Miserables – Musical will be ending its historical long run after almost 35 years in London's West End this Summer. Following it's final performance on July 13th, 2019, the first and last standing original production (yup, known for the famous onstage turntable) that played to packed houses in London since 1985 will have played over 15,000 performances.

However, LES MISERABLES is not exactly leaving London just yet. The musical's London home at the Queen's Theatre (where it played there since 2004 transferring from London's Palace Theatre) will be going through a 4 month renovation. The renovation of the Queen's Theatre will consist of the redoing the lobby (including more bathrooms), backstage and of course the auditorium. The biggest part of the project will be the restoring the original box seats, and loges (designed by architect W.G. Sprague). The initial design was destroyed by a bomb back in 1940 which caused the Queen's Theatre to be shut down for 20 years. Following the renovation, the show will reopen at the Queen's Theatre on December 18th, 2019 but with Cameron Mackintosh Ltd's acclaimed new production that was initially created for LES MIZ's 25th Anniversary (directed by Laurence Connor) that is still playing all around the world. This new production features an incredible mix of old and new elements including a little bit of some familiar costumes, new staging, and a full new set inspired by the paintings of the original novel's author himself… Victor Hugo all projected on a LED screen. It will also include a new cast plus reworked orchestrations.

Meanwhile during the interim of the original production's closing and the new production revival's opening while the Queen's Theatre is being renovated, LES MISERABLES will be performed as a staged concert production in the West End for a strictly limited 16 week engagement beginning August 10th, 2019. This concert presentation will be performed at London's Gielgud Theatre (right next door to the Queen's Theatre) featuring a full cast and an onstage 65 piece orchestra. The cast will include an exciting all-star lineup of talents who are no strangers to being a part of the iconic musical consisting of….

International tenor Alfie Boe reprising his legendary performance of PRISONOR 24601 himself "Jean Vailjean" (a role that made him a worldwide star from his performance in the musical's 25th Anniversary concert at London's The O2 Arena. He went on to play the role in the original production at the Queen's Theatre and the 2014 Broadway revival),

Olivier Award winner and iconic West End star Michael Ball OBE (who originated the role of "Marius" in the original 1985 production and played the same for the 10th Anniversary Royal Albert Hall) this time taking on the role of the cruel "Inspector Javert",

West End favorite Carrie Hope Fletcher (who began her career with the musical playing "Little Eponine" at the Palace Theatre and then "Adult Eponine" at the Queen's Theatre for the show's 30th Anniversary and most recently the new production during a tour stop in Dubai) this time take on the role of the impoverished factory worker dealing with hell herself "Fantine",

British Stage and Screen comedic star Matt Lucas reprising his scene stealing performance as the sleazy MASTER OF THE HOUSE himself "Thernadier" (a role he played in the 25th Anniversary concert at London's The O2 as well as the Queen's Theatre),

Katy Secombe reprising her performance of "Madame Thernadier" (a role she's been playing on and off at the Queen's Theatre since 2012),

Rob Houchen reprising the role of the heartthrob and romantic revolutionary student "Marius" (a role he played at the Queen's Theatre back in 2013),

and Bradley Jaden reprising the role of revolutionary leader "Enjolras" (a role he's played at the Queen's Theatre back in 2015).

In West End star and the musical's longest star himself John Owen-Jones will severe as the alternate "Jean Vailjean" playing the role 3 times a week. For Jones, he remains as the youngest actor in the show?s history to have played the iconic role at age 26 on the stages of both the Palace Theatre and the Queen's Theatre. He also was the first to play the role in the newly staged version of the show for its 25th Anniversary tour in 2010 and can be heard as "Jean Valjean" on the Les Mis?rables Live! album. In addition, he played the role twice on Broadway… both the 1st revival (the remounting of the original staging) at the Broadhurst Theatre and the 2nd and recent revival (the new 25th Anniversary production) for the closing cast at the Imperial Theatre

Additional casting will be announced soon.

DO YOU HEAR THE PEOPLE SING? As previously announced, Cameron Mackintosh Ltd's legendary 1982 first and last standing original production of Les Miserables – Musical (directed by Trevor Nunn and John Caird) will be coming to an end in London's West End this July 2019. However, the musical expecting to reopen at its longtime home at the Queen's Theatre in December 2019 with Mackintosh's new production that was made for the show's 25th Anniversary (directed by Laurence Connor) still playing across the country. In addition, the Queen's Theatre itself will be going under a 4 month renovation.

With the recent news of iconic musical's big change, super LES MIZ fans and veteran cast members have come together to sign a petition to Mackintosh telling him to keep the original staging (known for its breathtaking moments including it's signature set piece… the revolving turntable).Over 2,100 fans have signed the petition.

Almost 2.7K fans have signed a petition to save the original staging, begging Cameron Mackintosh: 'By all means keep the 'reimagined' one for tours but don't replace the original!'

BREAKING NEWS: After over 30 years of DREAMING THE DREAM, it has just been announced the Trevor Nunn and John Caird's still standing legendary original production of the iconic Les Miserables – Musical will be end its historical run in London's West End this Summer 2019 after over 15,000 performances. The show will play its final performance at London's Queens Theatre on July 13th, 2019.

However, LES MISERABLES is not exactly leaving London just yet. The Queens Theatre will be going through a 4 month renovation and the show will reopen there in December 2019. However, LES MIZ will return with Cameron Mackintosh's critically acclaimed new production that was made for musical's 25th Anniversary (directed by Laurence Connor) that initially toured the UK, North America (including Broadway in 2014), Australia, and around the world. This new production features an incredible mix of old and new elements including a little bit of some familiar costumes, new staging, and a full new set inspired by the paintings of the original novel's author himself… Victor Hugo. The new London production will also feature an entire new cast plus reworked orchestrations.

The 4 month renovation on the Queen's Theatre will consist of the redoing both the backstage and the auditorium. The biggest part of the project will be the restoring the original boxes, and loges,(designed by the Queen's Theatre's architect W.G. Sprague). The initial design was destroyed by a bomb back in 1940 which the Queen's Theatre was shut down for 20 years. In addition, the renovation will include adding more public bathrooms in the front of house.

While the renovation is happening, LES MISERABLES will be temporary transferring next door to the Gielgud Theatre for a 4 month run starting the end of July 2019. No word whether the original staging will be performed there or the new production.

Thoughts about the big change for LES MIZ in London? Who is sad to see that iconic turn table spin for the last time?