For those who have experienced the beauty of Broadway Theater, it's a moment to

For those who have experienced the beauty of Broadway Theater, it's a moment to never forget. However, there are certain rascals who like to ruin the experience for others both during the performance (ex: texting, photographing, video recording, etc) and at the stage door (ex: rants to a certain star who can't come out afterwards to meet the fans & STANS).

We just found out of another horrific Etiquette scandal that happened earlier this summer with the smash hit Beetlejuice The Musical. There was a person who sent in a horrifying threatening note / warning to the show's leading man 2 time Tony nominee Alex Brightman that made him feel very uncomfortable. Due to the incident, stage door was cancelled for several performances for safety. The show's leading lady Sophia Ann Caruso shared on her Instagram stories a note about what happened.

In addition for safety, Brightman deactivated his social media.

How dare anyone would want to put these talented, hardworking, and dedicated people's lives in danger?!!! No one deserves threats. 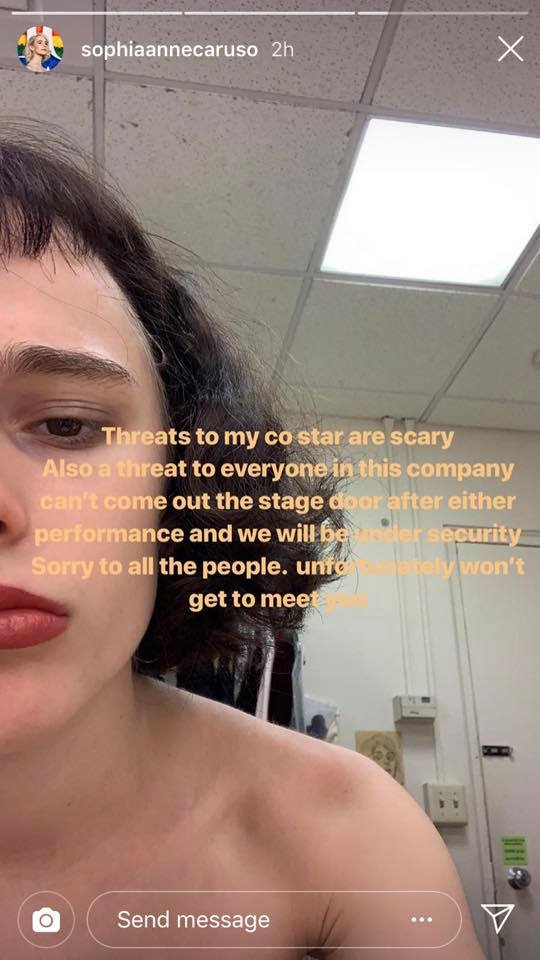 LADIES AND GENTS, THIS IS THE MOMENT YOU’VE WAITED FOR! The Award winning versatile s

LADIES AND GENTS, THIS IS THE MOMENT YOU’VE WAITED FOR! The Award winning versatile star of stage and screen Hugh Jackman kicks off his Spring to Fall 2019 World Tour tonight in Glasgow, Scotland in the UK. He will be continuing with his touring traveling to the UK, Europe, 2 legs of North America…

THE MOMENT IS FINALLY HERE!!! Be sure to tune in to The 72nd Annual Tony Awards comin

THE MOMENT IS FINALLY HERE!!! Be sure to tune in to The 72nd Annual Tony Awards coming to you live from New York’s famed Radio City Music Hall on CBS (hosted by Josh Groban and Sara Bareilles). Wishing all the nominees and performers Break a leg and you’re all winners tonight.

During the telecast, we at New York Broadway Tours will also be following along with the telecast and sharing with you all the gossip of what’s happening (from performances and who wins).

HOSANNA!!! We’ve been waiting an entire year and now the moment has arrived on Easter

HOSANNA!!! We’ve been waiting an entire year and now the moment has arrived on Easter Sunday. Tonight live from the Marcy Avenue Armory in Brooklyn, NBC is proud to present it’s 5th (and 1st ever SPRING EDITION) live televised musical featuring a spectacular all star cast including….

And be sure to follow along with us at New York Broadway Tours on WHAT’S THE BUZZ with our reactions and what’s happening during the show so far.

Full circle moment for Tony Award winner Harvey Fierstein as his debut smash hit Torch Song on Broadway makes it’s way back to where it all started on the Great White Way 36 years ago. It returns following a triumphant Off Broadway engagement at Second Stage Theater’s 296 seat Tony Kisner Theatre moving the production to it’s original home, the 597 seat Helen Hayes Theatre (now run by Second Stage). Watch Fierstein carry that torch from 43rd to 44th.

The new revival of TORCH SONG (starring Michael Urie) has no start date of previews but Opening Night is set for November 1st, 2018.

Harvey Fierstein carries the torch to Broadway this fall. #TorchSongBway