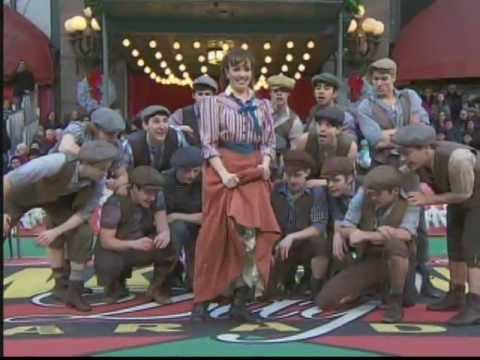 HEY THERE BROADWAY FANS. ARE YOU READY TO CARRY THE BANNER? We kick off the holiday season with The 90th Annual Macy’s Thanksgiving Day Parade in 7 days. Our TOP 20 BROADWAY AT THE MACY’S PARADE COUNTDOWN continues playing you the best of Musical Theatre performances from the past NBC and CBS telecasts.

At #7 on our countdown, it’s New York in the year 1899 inspired by the real true story of the real-life Newsboys Strike of 1899. EXTRA EXTRA, it’s all about Disney’s Tony Award winning smash hit Newsies.

For today we have special 2 performances from NEWSIES performing on the NBC and CBS editions of the Thanksgiving Day Parade. Both performances, it’s Kara Lindsay as Katherine Plummer and the Newsies themselves performing the toe-tapping second act opener KING OF NEW YORK.

They first appeared on the NBC edition from Harold Square in 2011, following their acclaimed sold out World Premiere run at Paper Mill Playhouse. This was around the time the announcement was made that NEWSIES was going to Broadway.
https://www.youtube.com/watch?v=aqq1M0rvEx0

The very next year in 2012, the cast performed on the CBS edition of the parade pre-recorded in front of an invited audience from the stage of the Nederlander Theatre (where the show was running at the time).
https://www.youtube.com/watch?v=epp6F1PM2vo

Following it’s acclaimed run at Paper-Mill Playhouse in NJ, NEWSIES (based on the cult classic 1992 Disney film of the same name) played Broadway’s Nederlander Theatre for 1,005 performances. Most recently, the National Tour ended this past October after 700 performances in 65 cities. Regional Theatre productions are currently right now in the works including at the world’s famous The Muny in St. Louis and at Civic Light Opera in Pittsburg this summer

As previously announced, Disney Theatrical Productions and Fathom Events will be releasing a filmed performance of NEWSIES during the National Tour’s stop at the Hollywood Pantages Theatre for 3 nights only,…February 16th, 18th, and 22nd, 2017 in Movie Theatres everywhere. For the filmed performance, original cast members Tony nominee Jeremy Jordan, Kara Lindsay, Andrew Keenan-Bolger, Ben Fankhauser, and Tommy Bracco returned to reprise their roles from Broadway for one night only. In addition, alumni of the Broadway and National Touring casts participated.

Does this show make you wanna be THE KING OF NEW YORK and SEIZE THE DAY?