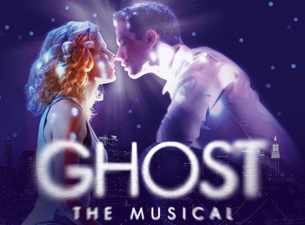 BELIEVE!!! 2021 marked the 10th Anniversary of one of the most romantic and thrilling shows that earned a huge cult following in Musical Theater history. We are talking about the musical adaptation of the Oscar winning film Ghost. What a legacy it has had….. DITTO!!!
For those who may not know, Ghost was a musical based on the 1990 romantic and thriller film from Paramount Pictures (which starred Patrick Swayze, Demi Moore, Whoopi Goldberg, and Tony Goldwyn). Set in New York City present day, the story follows a longtime couple settling into their life together. However, everything takes a turn for the worst when “Sam” (the boyfriend) is murdered and becomes a ghost. As events start to unfold, “Sam” sets out to save his girlfriend “Molly” from the person who killed him through the help of a psychic. The show features an original score by Dave Stewart and Glen Ballard. It also includes a book by the duo alongside the original film’s screenwriter Bruce Joel Rubin. Notable songs include HERE RIGHT NOW, THREE LITTLE WORDS, I CAN BREATHE, WITH YOU, NOTHING STOPS ANOTHER DAY, I’M OUTTA HERE, and more. The musical also includes the notable 1955 song UNCHAINED MELODY by Alex North and lyrics by Hy Zaret that was made famous by The Righteous Brothers used in the film.
The production was known for its unbelievable visual illusions on stage with actors being a Ghost including walking through doors, subways, and things flying around.
GHOST THE MUSICAL had its world premiere in March 2021 in Manchester, England playing the Manchester Opera House. It immediately transferred to London’s West End playing the Piccadilly Theatre for a year and a half long run. Under the direction of Tony Award winner Matthew Warchus and choreography by Ashley Wallen, the cast was led by…..
Richard Fleeshman (later Mark Evans) as “Sam Wheat,”
Caissie Levy (later Siobhan Dillon) as “Molly Jensen”,
Sharon D. Clarke (later temporary Da’Vine Joy Randolph) as “Oda Mae Brown”,
and
Andrew Langtree as “Carl Bruner”.
The musical earned mixed reviews mainly praising the production’s visual effects (illusions) and the cast’s performances.
It went on to be nominated for 6 Olivier Awards in 2012 including BEST NEW MUSICAL. But it lost all the categories.
Due to the great audience response, the show made its way overseas the following year to our New York City backyard. GHOST THE MUSICAL opened on Broadway the following year of 2012 playing the Lunt-Fontanne Theatre running for only 39 previews and 136 regular performances. With its same creative team, Fleeshman, Levy, and Randolph reprised their London performances for Broadway as “Sam Wheat”, “Molly Jensen”, and “Oda Mae Brown”. Additional cast included future Tony nominee Bryce Pinkham as “Carl Bruner”.
Despite also getting mixed reviews and low ticket sales, the Broadway production of GHOST THE MUSICAL went on to be nominated for 3 Tony Awards including BEST FEATURED ACTRESS IN A MUSICAL (for Da’Vine Joy Randolph). However, it also lost all the categories.
It continued to launch productions around the world including a UK / Ireland Tour, an International Tour, a North American National Tour (featuring Non-Equity actors), an Australian company, a German company, and so much more. It’s been translated to various languages.
Today, GHOST THE MUSICAL is also available for licensing via Theatrical Rights Worldwide. It has been performed already in various schools, community, and regional theaters everywhere.
Doesn’t this show make you want to BELIEVE?!!!
DITTO!!!
HAPPY 10 YEARS GHOST THE MUSICAL!!!
Who has seen this show?!!
Ghost the Musical – Official Trailer (HD) – YouTube