HAPPY 18TH ANNIVERSARY TO THE BOY FROM OZ!!! 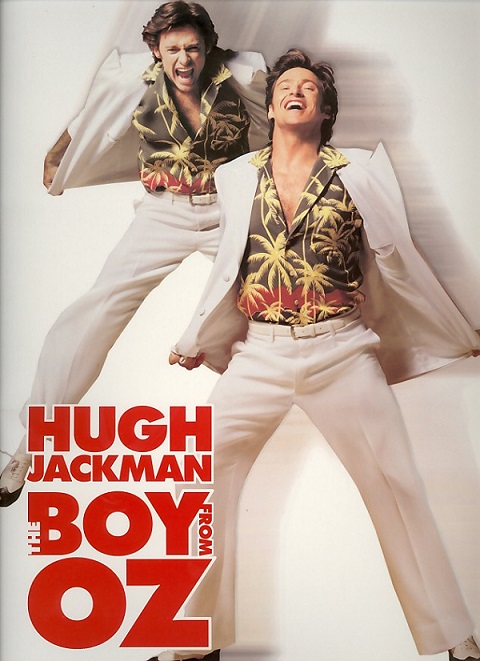 ALL I WANTED WAS THE DREAM…. and now its come true. Today marks the 18th Anniversary of the Broadway debut one one of the most critically acclaimed shows that has still earned a huge cult following with fans everywhere….. THE BOY FROM OZ.
For anyone who may not know, the story tells the story about the rise & fame of acclaimed flamboyant Australian singer-songwriter Peter Allen. He was known for being the first husband to Liza Minnelli before later became gay falling in love with partner model Gregory Connell. With a book by Nick Enright and Martin Sherman, the musical featured a full catalog of songs made famous by Peter Allen himself. Notable songs include NOT THE BOY NEXT DOOR, I STILL CALL AUSTRALIA HOME, DON’T CRY OUT LOUD, and of course….. (as seen below featuring its breakout star Hugh Jackman and the Broadway company) the showstopping I GO TO RIO.
The show originally had its world premiere in Australia at Her Majesty’s Theatre in Sydney back 1998. It was a huge success before later touring the continent including Brisbane, Melbourne, Adelaide and Perth. It ran for a complete total of 2 years and 766 performances. Under the direction of Gale Edwards, that premiere cast consisted of….
Todd Mckenney as “Peter Allen”,
Angela Toohey as “Liza Minnelli“
Divinyls frontwoman Chrissy Amphlett as “Judy Garland“,
Murray Bartlett as “Greg Connell”,
Jill Perryman as “Marion Woolnough”,
Mathew Waters as “Young Peter”,
and more.
It went on to be nominated for 8 Helpmann Awards (which is considered the Australian version of the Tonys) taking home 4 including BEST MUSICAL and BEST LEADING ACTOR IN A MUSICAL (for Todd McKenney).
With the success of the Australian run, THE BOY FROM OZ began to expand in trying to get the show to go International. That first place since its premiere….. our New York City backyard.
THE BOY FROM OZ made its Broadway debut at the Imperial Theatre in the Fall of 2003 at the Imperial Theatre. The production ran for a year long run of 32 previews and 365 performances. With an updated book and new direction by Philip William McKinley, the cast was led by…..
Hugh Jackman in a breakout Broadway debut as “Peter Allen”,
future Tony winner Stephanie J. Block in her Broadway debut as “Liza Minnelli”,
Tony nominee Isabel Keating as “Judy Garland”,
Tony winner Jarrod Emick as “Greg Connell”,
Tony nominee Beth Fowler as “Marion Woolnough”,
Mitchel David Federan as “Young Peter”,
and more.
The reviews were mixed but the cast earned critical praise especially for Hugh Jackman. Despite running for a year, the show was still able to have recouped its investment of $8.25 million after closing.
It also would go on to be nominated for 5 Tony Awards in 2004 including BEST MUSICAL. It took home only 1 for BEST LEADING ACTOR IN A MUSICAL (for Hugh Jackman – who also ironically was hosting the Tonys at the same time). The show would also get a glory at the Drama Desk winning 2 for OUTSTANDING LEADING and FEATURED ACTRESS IN A MUSICAL (for Jackman and Fowler). They also received 3 special HONOREES at the Theatre World Awards (for Jackman, Keating, and Federan).
2 years after the Broadway production closed, THE BOY FROM OZ made its way back to Australia with an ARENA TOUR production. Under the direction of Kenny Ortega, this spectacular arena staging was led by…..
Hugh Jackman reprising his Tony winning Broadway performance of “Peter Allen” for his hometown crowd,
Angela Toohey reprising her Australian performance as “Liza Minnelli”
Chrissy Amphlett reprising her Australian performance as “Judy Garland”,
Murray Bartlett reprising his Australia performance as “Greg Connell”,
Colleen Hewett as “Marion Woolnough”,
Shardyn Fahey-Leigh as “Young Peter”,
and more.
It later returned to Australia in 2010 with a brand new production featuring Todd McKenney reprising his OG performance as “Peter Allen”.
THE BOY FROM OZ was also performed in Peru and in Perth.
The licensing for the show is owned by David Spicer Productions. It has been performed in schools, community, and regional theaters everywhere.
HAPPY 18 YEARS THE BOY FROM OZ ON BROADWAY!!!
Any fans of THE BOY FROM OZ out there?!!!
How spectacular was that number?!!!
The Boy from OZ I Go to Rio Hugh Jackman & cast – YouTube