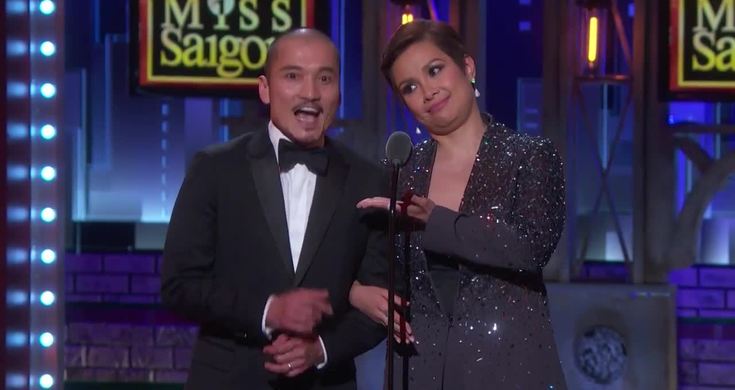 RISE & SHINE BROADWAY FANS! You are waking up to more of the best of the Great White Way on our TOP 40 TONY AWARDS COUNTDOWN. We are just 16 days away till Broadway?s biggest night of the year?. The 72nd Annual Tony Awards. Here comes more great performances and Broadway trivia.

At # 16 on our countdown is a thrilling, dark, romantic, and emotional musical. This show is set in 1970?s Vietnam (during the time of the Vietnam War). It follows a 17 year old Vietnamese orphan girl forced to work as a prostitute under the watchful eye of sleazy bar owner and falls in a forbidden romance with an American G.I soldier (who later abandons her). We are talking about the legendary and iconic musical that is?. Miss Saigon – Musical. Known as an updated version of Puccini?s opera Madame Butterfly, the musical features a score and book by Alain Boublil, Claude-Michel Schonberg, and Richard Maltby, jr.

From last year?s telecast, Tony nominee Eva Maria Noblezada as the young Vietnamese orphan ?Kim? and the cast of the most recent 25th Anniversary Broadway revival production perform THIS IS THE HOUR (from the YOU WILL NOT TOUCH HIM scene) and I?D GIVE MY LIFE FOR YOU.

MISS SAIGON was first conceived by Claude-Michele Schonberg when he came across a picture in a magazine taken from the Vietnam war. In the photo, a Vietnamese mother leaving her child at an airport heading for the United States where the child?s father (also an ex-GI) would be in a position to provide a much better life for the child. Schonberg considered that photo as ?The Ultimate Sacrifice? and inspiring him to create MISS SAIGON alongside his partner Alain Boublil (who were already becoming worldwide following the success of Les Miserables – Musical). From there, they went to work on developing the story, songs, and the production a full team under the direction of Nicholas Hytner and choreography by Bob Avian, and produced by the legendary Sir Cameron Mackintosh. To find the right group of performers,, the creative team launched a full Nationwide Open Casting Call tour. The search for actors took them to New York, Los Angeles, London, the Philippines, and more.

Tony winner Jonathan Pryce (who also appeared in the original London cast) as ?The Engineer?,

and Liz Callaway as ?Ellen?.

The production had a huge lineup of replacement actors in both the Broadway and London companies. Salonga returned numerous times in the Broadway company on and off to play ?Kim?.

With the success of the London and Broadway companies, MISS SAIGON went on to become a worldwide hit musical with numerous companies across North America, UK, Australia, and productions translated into many different languages.

The show would later be revived both in London and on Broadway both once.

The most recent revival (under the direction of Laurence Connor and choreography once again by Bob Avian) was created to commemorate the 25th Anniversary of the show?s debut. Just like when the show was premiering, the creative team did a full Worldwide audition tour to find the cast that could honor Boublil and Schonberg?s work for the 25th Anniversary. The production first went to play London?s West End in 2014 for a sold out 2 year engagement at the Prince of Edward?s Theatre running for 760 performances. It went on to receive numerous honors including an Olivier Award nomination for Best Musical Revival.

Following the success of the London engagement, the 25th Anniversary revival came back to Broadway returning to its original New York home at the Broadway Theatre for a 1 year engagement of 364 performances. The Broadway revival cast consisted of?.

Eva Noblezada (who also appeared in the 2014 London revival cast) as ?Kim?,

Jon Jon Briones (who started off in the Ensemble of the original production?s London cast and later went on to appear in the 2014 London revival cast) as ?The Engineer?,

Alistair Brammer (who also appeared in the 2014 London revival cast) as ?Chris?,

Rachelle Ann Go (who also appeared in the 2014 London revival cast) as ?Gigi?,

and Katie Rose Clarke as ?Ellen?.

The recent Broadway revival was nominated for 2 Tony Awards last year for Best Revival of a Musical and Best Leading Actress in a Musical (for Eva Noblezada).

The 25th Anniversary Revival production of MISS SAIGON is currently on a UK & Ireland Tour which launched last year in 2017. In addition, a Miss Saigon US National Touring production of the revival is set to kick off this September 2018 in Providence, Rhode Island before heading to numerous cities across North America for an entire year.

In addition to its success on stage, MISS SAIGON was a hit on the big screen in 2014. That most 25th Anniversary revival production was filmed at the Prince of Edwards Theatre in London back in 2014 at the official 25th Anniversary Gala performance during its 25th Anniversary gala performance. The filming was kept secret till it was revealed at the 2016 closing of the London revival by Cameron Mackintosh. It was seen in selected Movie Theaters across the world. A real film adaptation of MISS SAIGON is still in the works.

FUN FACT: The original production of MISS SAIGON caused an uproar of controversy in 1990 with the casting for the role of the Eurasian, sleazy, and showstopping lead role of “The Engineer” and the show almost did not open in New York. Acclaimed Welsh Caucasian actor Jonathan Pryce originated the role of “The Engineer” in London’s West End earning rave reviews and won the Olivier Award for his performance. However with the announcement of the show moving to Broadway, Actors’ Equity Association would not let Pryce continue with the production with a statement saying that it was a threat to the Asian community. Outraged by the ruling, the statement was met with a lot of negative criticism from many people including the show’s Award winning producer Sir Cameron Mackintosh who threatened to have the show cancelled if they would not let him continue. Pryce went on to Broadway winning his Tony Award. Over the years, MISS SAIGON continued to incorporate more Asian actors playing the role and several additional Caucasian actors as well including the late Kevin Gray.

MISS SAIGON continues to also be a beloved show performed in Regional and Colleges everywhere.

the 71st Annual Tony Awards on CBS All Access.