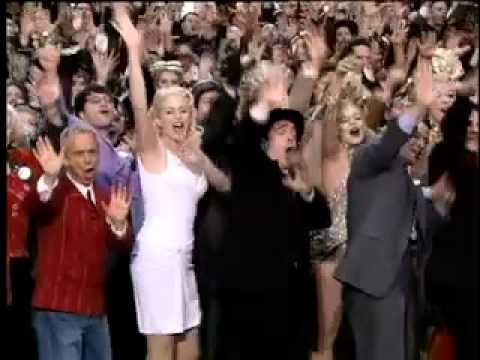 19 years ago, we tragically lost loved ones and brave heroes who sacrificed their life to help others in one of the most terrifying times in world history. The events of the September 11th, 2001 terror attacks took a huge toll on so many people including the Broadway community.

When the news broke of the attacks on both New York's World Trade Center and Washington D.C.'s Pentagon, everyone was scared and grieving. All Broadway shows that were running at the time cancelled 2 days of performances. All of New York City (and especially the Theater district) was deserted. Former New York City Mayor Rudolph Gulliani held a city hall meeting and wanted to make sure that Broadway kept doing her thing as quickly as possible. This was not just for economic benefits. Gulliani knew that the best way to get away from all your troubles is to experience some fun top notch entertainment.

The curtain went back up on September 13th, 2001 which all the casts of all the shows running at the time sang GOD BLESS AMERICA for several weeks during their curtain calls. However, ticket sales were extremely low due to people still being scared. With the Broadway community agreeing with Giuliani's thoughts that Entertainment is truly the greatest medicine, they all came together into a recording studio and then brought that Live Theater magic outside to the streets of Times Square for a special I LOVE NEW YORK commercial. Choreographed by Tony winner Jerry Mitchell, it featured Broadway Veterans and cast members dressed in their running show costumes performing Kander & Ebb's beloved theme from NEW YORK, NEW YORK. The tourists and New Yorkers agreed. It was well received and shown in over 20 countries. It also encouraged people who were still feeling depressed and scared to both come to New York City and experience live some top-notch entertainment.

Check out that 30 second commercial right below featuring an amazing lineup of veterans such as….

It also features some familiar Broadway characters from hit shows BOTH running past and present including….

The Producers,
Disney's The Lion King,
Rent,
the original production of Les Miserables,
the 1998 revival of Cabaret,
Disney's Beauty and the Beast,
Aida,
Contact,
the 2001 revival of 42nd Street,
the 2000 revival of The Music Man,
The Phantom of the Opera,
the current revival of Chicago,
and the 1999 revival of Kiss Me, Kate.

We know and we hope for a fact that Broadway will definitely put together something special like this once this COVID-19 pandemic is fully over.

Broadway has been there for so many of the most difficult times in the world but came back strong.

Our love today also goes out to loved ones who lost closed and dear friends no longer with us on that terrifying day.

How beautiful was this I LOVE NY campaign?