Kristin Chenoweth’s final performance of MY LOVE LETTER TO BROADWAY 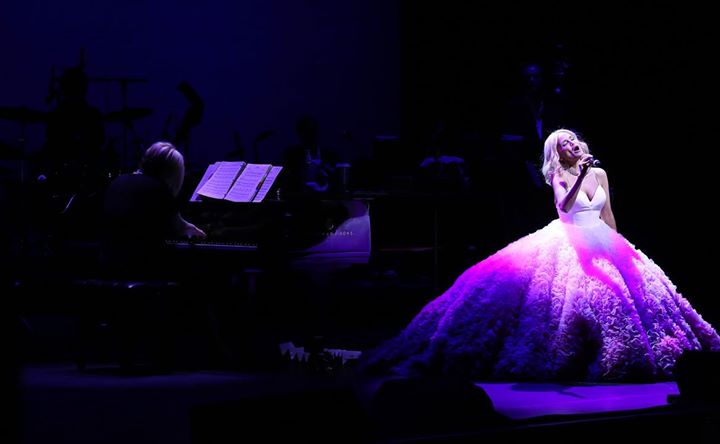 Tonight, Tony and Emmy winner Kristin Chenoweth plays her 12th and final performance of her 2 week acclaimed solo show MY LOVE LETTER TO BROADWAY at the Lunt Fontanne Theatre. For the final performance, Chenoweth’s special guest is going to be 2 time Tony nominee Andy Karl who previously worked with her on the Roundabout Theatre Company’s revival of ON THE 20TH CENTURY and members of the Oklahoma City University choir (where Chenoweth studied). Up next for the Broadway darling, she is flying back to LA to begin her rehearsals for NBC’s upcoming Hairspray Live where she will be playing the racist, nasty, and cruel mother/producer Velma Von Tussel (on December 7th). From there, she will be going back on tour in 2017.

Our very own Michael was at the evening show last night. Chenoweth was phenomenal every step of the way. She makes the audience laugh, cry, and feel inspired especially after a crazy week with the election. If you ever go see a Kristin Chenoweth concert or anytime she is in Theatre, Film, TV, or the concert stage, we have to tell you that she is NEVER, NEVER, EVER, EVER a disappointment!! So many great moments of the show featuring songs from her career (WICKED The Musical, PROMISES PROMISES, GLEE), songs from past and current new Great American songbook album THE ART OF ELEGANCE, country standards, and even some classic Broadway songs grew up listening to or have performed in (including a much more cleaner version of DANCE 10, LOOKS 3 from A Chorus Line which she changed the lyrics TITS & ASS to BOOBS & BUTT (this is true) and an emotional performance of BRING HIM HOME from Les Mis?rables Broadway). Her special guests last night was Tony winner and fellow Oklahoma girl Kelli O’Hara where they sang the classic OKLAHOMA and members of the Furman University choir (where Kristin’s music director Mary-Mitchell Campbell went) . Plus, she even gives you 10 seconds to take pictures of her while she is on stage at point. If you have not seen the show in NYC, no worries, catch her on the road when she comes to a city near you.

Congrats to Kristin, Richard Jay-Alexander, Mary Mitchell, the crew, the musicians, the entire creative team, and all of Chenoweth’s special guests and choirs. Happy trails! Please come back to Broadway ASAP!!

BECAUSE WE KNEW YOU, WE HAVE BEEN CHANGED FOR GOOD!

Happy Friday to YOU! Check out exclusive highlights from Kristin Chenoweth’s Broadway show!