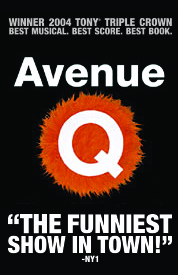 GOOD MORNING BROADWAY FANS! It is getting closer to Broadway’s biggest night. The 74th Annual Tony Awards is just 16 DAYS AWAY!! Truly the ultimate Party of the Fall celebrating the return of Live Theater in New York City. We have more beloved performances from previous telecasts coming up on our TOP 50 TONY AWARDS COUNTDOWN. Are you ready for more favorites?!!!
At # 16 on our countdown, we take you to an unusual neighborhood somewhere in New York City. There, we meet some authentic people, monsters, and even human-looking puppets all within their 20’s and 30’s trying to figure out what they want out of life. Along the way, they learn of so many topics like LGBTQ, Racism, Internet Porn, Unemployment, Sex, Schedenfraude, and more. Nope, it’s not Sesame Street but…… Avenue Q. It features a notable score by Robert Lopez and Jeff Marx along with a book by Jeff Whitty.
From the 2004 telecast, Tony nominees John Tartaglia as “Princeton” and “Rod”, Stephanie D’Abruzzo as “Kate Monster”, and members of the original Broadway cast perform the opening fan favorite IT SUCKS TO ME.
AVENUE Q was first conceived in 1999. Composers Robert Lopez and Jeff Marx were originally writing a new project for The Muppets called KERMIT, PRINCE OF DENMARK (inspired by Shakespeare Hamlet). It was first technically supposed to be a film and then a stage musical (produced by BMI Musical Theatre Workshop). However, the project was turned down by The Jim Henson Company. However, a lightning bulb clicked for Lopez and Marx. Their rejection inspired them to not write for popular characters again and decided to create their own children’s puppet project for Adults. Instead of the puppets teaching children letters, numbers, shapes, colors, and basic things about life, Lopez and Marx came up with the idea of a show featuring adults and puppets in the same room talking about adult themes including racism, pornography, homosexuality, romance relationships, and more. Acclaimed Jim Henson puppeteer Rick Lyon (who Marx and Lopez originally worked on the KERMIT project with) came on board and started designing both the human looking and furry monster puppets. In addition, book writer Jeff Whitty came on board and began the early stages of writing AVENUE Q. They also continued their relationship with BMI Musical Theatre Workshop to work on the project.
AVENUE Q went through many years of readings and workshops. Finally in the Spring of 2003 under the direction of Jason Moore, the show had its official world premiere Off Broadway at the Vineyard Theatre for 72 performances. The critics and audiences were praising the production, it was transferred to Broadway’s Golden Theatre where it ran for a total of 2,556 performances. Under the direction of Jason Moore, the cast was led by….
John Tartaglia (later Barrett Foa, Howie Michael Smith, and Rob McClure) as “Princeton” and “Rod”,
Stephanie D’Abruzzo (later Mary Faber, Carey Anderson, Kelli Sawyer, Christy Carlson Romano, Sarah Stiles, Veronica Kehun, and Anika Larsen) as “Kate Monster” and “Lucy The Slut”,
Rick Lyon (later Christian Anderson) as “Nicky”, “Trekkie Monster”, “Bad Idea Bear”, and others
Ann Harada (later Ann Sanders and Minglie Chin) as “Christmas Eve”,
Jordan Gelber (later Evan Harrington and Nick Kohn) as “Brian”,
Natalie Ventia Becon (later Haneefah Wood and Danielle K. Thomas) as “Gary Coleman”,
and
Jennifer Barnhart (later Aymee Garcia) as “Mrs. Thisletwat”, “Bad Idea Bear”, and others.
The show went on to be nominated for 6 Tony Awards winning 3 including the surprising BEST MUSICAL!!
Following the success of Broadway, the show went on to become a worldwide hit that still makes audiences laugh 8 times a week including productions in Las Vegas, several US National Tours, London’s West End, Australia, and several International productions translated into every major language.
AVENUE Q’s 2009 Broadway closing at the Golden Theatre was to make way for a limited revival of David Mamet’s play Oleanna. However, the producers kept a huge secret for all the fans. At the closing curtain call, it was announced that the show was going to transfer back to Off Broadway. A few months later, the show transferred to STAGE 3 at New World Stages. It ran there for an additional 10 years ending its New York City life in 2019 following over 6,400 performances. With the same creative team, the continued cast members included….
Seth Rettberg (later Adam Kantor, Jeff Sears, Darren Bluestone, Matt Dengler, and Ben Durocher) as “Princeton” and “Rod”,
Anika Larsen (later Sarah Stiles, Veronica Kehun, Dana Steingold, Elizabeth Ann Berg, and Gizel Jiménez) as “Kate Monster” and “Lucy The Slut”,
Cullen Titmus (later Rob Morrison and Jason Jacoby) as “Nicky”, “Trekkie Monster”, “Bad Idea Bear”, and others
Sala Iwamatsu (later Grace Choi, Ann Sanders and Hazel Anne Siegel) as “Christmas Eve”,
Nick Kohn as “Brian”,
Danielle K. Thomas (later Haneefah Wood and Lacretta Nicole) as “Gary Coleman”,
and
Maggie Lakis (later Katie Boren, Jennifer Barnhart, Kerri Bracken, and Jamie Glickman) as “Mrs. Thisletwat”, “Bad Idea Bear”, and others.
Life after New York City, AVENUE Q has gone on to be performed in Community and Regional Theaters. There is even a School edition of the show for those who do not want to perform the show with the Adult Language. Plans for several new companies are in the works including a brand new North American National Touring company.
How hilarious is that show?
#TonyAwards #CountdownToTheTonys #NYBTTop50TonyAwardsCountdown #BroadwaysBiggestNight #BroadwaysBack #TheShowMustGoOn
Avenue Q – YouTube