BREAKING NEWS: It has just been announced that celebrated acclaimed composer, lyricist, and playwright Leslie Bricusse sadly passed away today at the age of 90. This 2 time Oscar winner and 5 time Tony nominee was best known for this unforgettable works in BOTH on Broadway and on the big screen.
His notable works included….
Victor Victoria – collaborating with the late Henri Mancini for the film and later Frank Wildhorn with the stage adaptation (notable songs include LE JAZ HOT),
The 1967 film (which later became a musical) Doctor Dolittle – which he collaborated with Lionel Newman and Alexander Courage (notable songs include IF I CAN TALK TO THE ANIMALS),
the 1961 musical STOP THE WORLD – I WANT TO GET OFF – the first of many collaborations with Anthony Newly),
Jekyll & Hyde – collaborating with Wildhorn (notable songs include THIS IS THE MOMENT, SOMEONE LIKE YOU, and A NEW LIFE),
several James Bond films including GOLDFINGER and YOU ONLY LIVE TWICE,
his works with Sammy Davis Jr. – including the Grammy winning standard WHAT KIND OF FOOL AM I.
and
of course his beloved score from Willy Wonka & the Chocolate Factory – collaborating with Newly on many of its popular tunes that would be used in the recent Broadway musical Charlie and the Chocolate Factory (including THE CANDY MAN, I GOT A GOLDEN TICKET, and PURE IMAGINATION).
Our hearts are sadden by this loss. Thank you for your unforgettable talents. We will miss you. RIP
Thoughts?
Leslie Bricusse, ‘Goldfinger’ and ‘Willy Wonka’ Songwriter, Dies at 90 (msn.com)

YOU LEARN! Alanis Morissette‘s Tony and Grammy winning smash hit Jagged Little Pill is set to finally ROCK the Australian Musical Theater scene this holiday season. After a brief delay due to recent COVID-19 / Delta Variant restrictions, this new company is all set to finally debut. The show will kick off in….
Sydney, Australia at the Theatre Royal Sydney from December 2nd- 19th, 2021
and
will continue in Melbourne, Australia playing the Comedy Theatre beginning January 2nd, 2022.
That’s not all, EVERYTHING’S GONNA BE FINE, FINE, FINE indeed cause the casting announcement has been revealed. Under the direction of Tony winner Diane Paulus, the Australian premiere of JAGGED LITTLE PILL will be led by….
Multi award winning Australian actress and pop star Natalie Bassingthwaighte as struggling suburban mother “Mary-Jane Healy”,
newcomer Liam Head as the “perfect son” himself “Nick Healy”,
Australian pop star and actor Tim Draxi as the porn addicting and frustrated suburban Dad as “Steve Healy”,
newcomer Emily Nkomo as rebellious, bisexual, and adopted African American teenage daughter “Frankie Healy”
newcomer Grace Miell as vulnerable but recently raped victim “Bella Fox”,
The Voice Australia favorite and pop star Aydan as the smart love interest “Phoenix”
Maggie McKenna (recently seen overseas here in the US as “Zoe Murphy” on the National Tour of Dear Evan Hansen) as humorous, vulnerable, and easily hurt lesbian “Jo Taylor”.
and
a Full Ensemble.
The casting announcements features a video promo of the new Ensemble including McKenna’s voice performing the musical’s powerful 11:00 F*** You anthem YOU OUGHTA KNOW.
This new Australian company of JAGGED LITTLE PILL is the first of many international productions of the hit show to open after the show’s ongoing company here in our New York backyard. The Broadway production itself is set to reopen this Thursday, October 21st, 2021 at the Broadhurst Theatre.
Congrats to this new company!!!
Thoughts?
Who is excited?!!
JAGGED LITTLE PILL THE MUSICAL announces full cast and dates for a Melbourne season | News (aussietheatre.com.au)

New York Broadway Tours counts down to ringing in the Holiday Season with TOP 30 BROADWAY AT MACY’S PARADE COUNTDOWN!!

If you enjoyed our TOP 50 TONY AWARDS COUNTDOWN last month, there is more showstopping Broadway favorites coming up. As many of you know within the next 39 DAYS, it’s ready gonna be Thanksgiving as we ring in the holiday season. You know what that means?!!!
LET’S HAVE A PARADE!!! November 25th, 2021 will be Thanksgiving Morning where we get to wake up to celebrating New York’s legendary MIRACLE ON 34TH STREET. We of course are talking about The 2021 Macy’s Thanksgiving Day Parade. This year’s parade promises to be spectacular as it will be the first parade in 2 years to have spectators in-person. In case anyone may not know, last year’s event was cancelled for experiencing LIVE IN PERSON due to the COVID-19 pandemic. However, it was done as a combination of a pre-recorded and live event on NBC and CBS without the crowds and not that many participants.
With the world starting to make its way back to normal, this year’s edition promises to make up for all that lost time. The parade will include all of its notable moments including…..
The Giant Balloons,
Spectacular Floats,
High Energy Clowns,
Spectacular Marching Bands,
Santa Claus,
some of the biggest names in show business (Film, TV, and Music),
and
so much more.
However, the big highlighted moment when its comes to the Macy’s Thanksgiving Day Parade for us is……. THE BROADWAY PERFORMANCES!!! If you’ve seen the NBC telecasts, they are performed in front of the Macy’s store in Herald Square on 34th Street. Meanwhile the CBS telecast features the performances pre-recorded on location somewhere in NYC or at their Broadway Theater.
With the Broadway acts, we are pleased to announce beginning October 26th, 2021 on the 30 DAY mark…. we at New York Broadway Tours will be presenting our TOP 30 BROADWAY AT MACY’S COUNTDOWN.
Every morning leading to the parade, we will be sharing with you our favorite showstopping performances from Broadway’s biggest night of the year from both previous NBC and CBS telecasts of the parade. It will feature many of your favorite shows. Get ready to sing along, share your reactions, and excitement. We also will be giving some fun facts about the history of many of these unforgettable Musicals we all love.
The Parade will air traditionally both on NBC (in front of that famous Macy’s Store in Herald Square on 34th Street) and on CBS (live from Times Square).
Let’s celebrate the return of coming together once more and of course Broadway being back!!!!
Who is excited?!!!

FIRST LOOK: ALL ABOARD!!! Get ready to take the ultimate journey WAY DOWN UNDER THE GROUND as the National Tour of the Tony and Grammy Award winning smash hit Hadestown officially launched. We are so happy to share with all of you this brand new b-roll proshot trailer featuring the show’s new OG Tour cast.
Under the direction of Tony winner Rachel Chavkin, this new touring company of Anais Mitchell hottest pop-folk opera is led by….
Drama Desk nominee Nicholas Barasch (Broadway’s 2009 revival of West Side Story along with the Roundabout Theatre Company revivals of The Mystery of Edwin Drood and She Loves Me) as “Orpheus”,
Morgan Siobhan Green (Broadway’s Be More Chill) as “Eurydice”,
Tony winner Levi Kreis (Broadway’s Million Dollar Quartet and last seen in Violet) as “Hermes”,
HADESTOWN original cast member *Kimberly Marable* (who also appeared in Broadway’s The Lion King) as “Persephone” full time after previously understudying the role in the Broadway production,
Olivier nominee Kevyn Morrow (London’s Ragtime and Broadway’s recent revival of The Color Purple, Bandstand, and previously in Moulin Rouge) as “Hades”,
Belén Moyano, Bex Odorisio, and Shea Renne will be the touring “Fates”,
and
a Full Ensemble.
HADESTOWN National Tour is current playing at the The John F. Kennedy Center for the Performing Arts in our nation’s capitol of Washington D.C. Upcoming engagements will include stops in….
Boston, MA,
Columbus, OH,
Detroit, MI,
Appleton, WI,
New Orleans, LA,
Houston, TX,
Dallas, TX,
Memphis, TN,
Philadelphia, PA,
Minneapolis, MN,
Tucson, AZ,
Los Angeles, CA
San Diego, CA,
San Francisco, CA,
Salt Lake City, UT,
Miami, FL,
Orlando, FL,
Hartford, CT,
and
so much more.
For anyone who isn’t able to make it to NYC to see HADESTOWN at the Walter Kerr Theatre. This is your chance to see it in a city near you.
How amazing was that?!!
Hadestown | October 13-31, 2021 | The Kennedy Center – YouTube

BREAKING NEWS: The Foundation for New American Musicals is set to present its first ever benefit gala honoring 2 of the most acclaimed Award winning faces of our Broadway Theater scene next week. It has just been revealed that this year’s recipients will consist of it’s co-founders….
Tony, Grammy, and Emmy Award winning composer Marc Shaiman (Hairspray, Catch Me If You Can, Smash, and recently Mary Poppins Returns)
and
Tony nominee Robert Klein (Broadway’s They’re Playing Our Song and The Apple Tree).
The Gala will be held on October 24th, 2021 at Broadway’s New Amsterdam Theatre (current home of Aladdin).
The Gala will also include live performances from some familiar faces who have worked with both Shaiman and Klein including….
Tony Award winner Marissa Jaret Winokur (Broadway’s original “Tracy Turnblad” in Hairspray),
Emmy Award winner Bruce Vilanch (Original National Tour and Broadway replacement “Edna Turnblad” in Hairspray and TV’s Hollywood Squares plus writer for the Oscars, Emmys, and Tonys),
Tony nominee Megan Hilty (Broadway’s WICKED, 9 to 5, and Noises Off plus TV’s Smash),
Broadway and West End favorite Marisha Wallace (recently seen as “Motormouth Mabel” in the recent limited engagement West End revival of Hairspray),
and more.
Congrats Marc and Robert!!!
How exciting is this?!!!
The Foundation for New American Musicals to Honor Marc Shaiman and Robert Klein | AllFamous.org 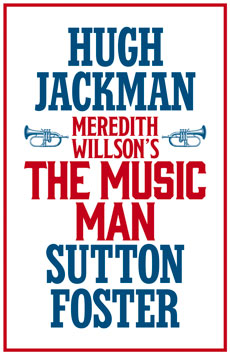 BRAODWAY THROWBACK: The Award winning legendary real-life Greatest Showman himself Hugh Jackman is set to make his way back to the Great Bright Way as “Professor Harold Hill” in the highly anticipated revival of Meredith Wilson’s The Music Man this holiday season. For the stage and screen showstopper, this musical is truly a full circle swing.
THE MUSIC MAN originally auditioned for a production at the age of 14 in Australia. He mentioned in interviews where he prepared the full length song of the show’s opening number ROCK ISLAND (best known as one of the first major OG rap songs in Musical Theater history). However, he was rejected from it. Years later, the score always stayed with him. He even got to visit that iconic opening number from MUSIC MAN when he hosted The 2014 Tony Awards (his 4th time hosting Broadway’s biggest night).
We have footage of that moment right below. Here is Hugh Jackman rapping ROCK ISLAND alongside pro-rappers LL Cool J and T.I.
Now, Jackman will finally get to march his heart out into this iconic show playing the lead. Of course, Jackman will be sharing the stage alongside Tony winner Sutton Foster as “Marian Paroo” and a full all-star cast.
After 2 delays, Tony winners Jerry Zaks and Warren Carlyle’s new revival of THE MUSIC MAN will finally march its way into Broadway’s Winter Garden Theatre. Previews will begin December 20th, 2021 and the official Opening Night is scheduled for February 10th, 2022.
How amazing is this?
Who is excited for Hugh?!!!
P.S. Also HAPPY BIRTHDAY HUGH JACKMAN!!!! Can’t wait to see you back on Broadway!!!
“Rock Island” Music Man Rap | Hugh Jackman | 2014 Tony Awards – YouTube
« Older Entries