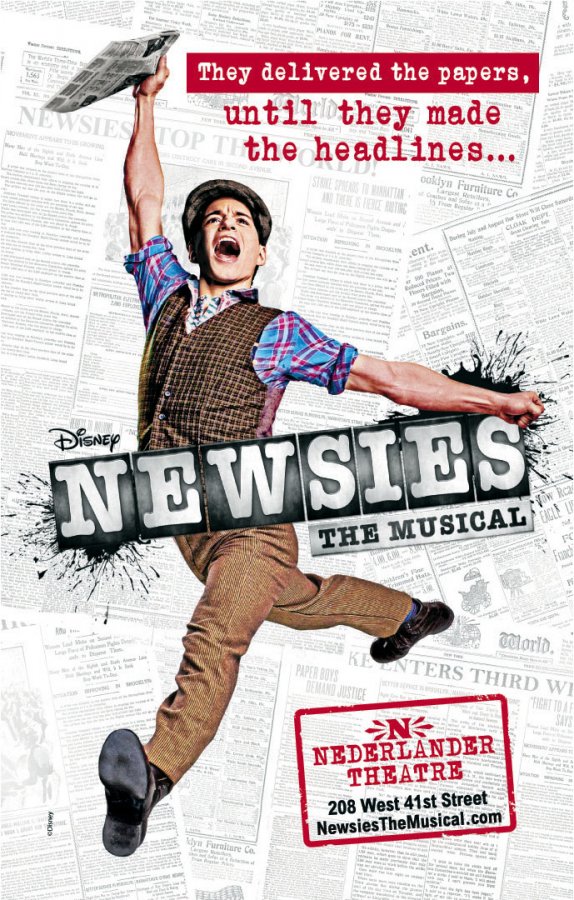 RISE & SHINE BROADWAY FANS!! RISE & SHINE BROADWAY FANS!!! We are only 30 DAYS AWAY till Broadway’s biggest night of the year…. The 74th Annual Tony Awards. We got more of the greatest musical showstoppers coming your way on our TOP 50 TONY AWARDS COUNTDOWN. This is truly the ultimate celebration as we gear also for the return of Live Theater after a previous rough and sad year. Here comes another big Broadway favorite!!!
At # 30 on our countdown, we go to New York City back in time to the year of 1899 during the historical time of the Newsboys Strike. This is of course Disney’s acclaimed smash hit Newsies. With a score by Alan Menken, lyrics by Jack Feldman, and a book by Harvey Fierstein, it’s based on the 1992 cult Disney film of the same name.
From the 2012 telecast, Tony nominee Jeremy Jordan as “Jack Kelly”. Kara Lindsay as “Katherine Plumber”, and the original Broadway cast perform 2 of the musical’s toe-tapping anthems ONCE AND FOR ALL and SEIZE THE DAY.
.
NEWSIES initially was a huge box office flop when the original 1992 film (starring Christian Bale) was released. However, following numerous airings on the Disney Channel, it earned a huge cult following. At the same time with Disney already having worldwide success with acclaimed projects on Broadway, fans petitioned it to be translated into a stage musical. Alan Menken and the Disney team decided to give it a shot.
After a brief set of early development readings and workshops, the show originally premiered at New Jersey’s Paper Mill Playhouse in 2011 for a complete sold out run. With the overwhelming response, NEWSIES transferred to Broadway the following year in 2012 playing the Nederlander Theatre. The initial run was technically supposed to be a 6 month limited engagement. However, thanks to it selling out and people were dying to see it, the team decided to have the show as an open ended before ending its official run in 2014. The Broadway run lasted for an incredible 1,005 performances. Under the direction of Jeff Calhoun and choreography by Christopher Gattelli, the cast starred…
Jeremy Jordan (later Corey Cott) as “Jack Kelly”,
Kara Lindsay (later Liana Hunt) as “Katherine Plumber”,
John Dossett as “Joseph Pulitzer”,
Andrew Keenan-Bolger (later Andy Richardson) as “Crutchie”,
Capathia Jenkins (later LaVon Fisher-Wilson) as “Medda Larkin”,
Ben Fankhauser as “Davey”,
Tommy Bracco (later Clay Thompson) as “Spot”,
& more.
The show was nominated for 8 Tony Awards in 2012 winning only 2 for BEST ORIGINAL SCORE (for Alan Menken) and BEST CHOREOGRAPHY (for Christopher Gattelli).
Following its Broadway run, the show embarked on an acclaimed 2 year National Tour traveling all across America. It played 784 performances in 65 cities all across North America. It also featured some additional updated to the production including a new song for the character of “Crutchie” in the 2nd act entitled LETTER FROM THE REFUGE. With its original creative team reunited, the tour cast was led by….
Dan DeLuca (later Joey Barreiro) as “Jack Kelly”,
Stephanie Styles (later Morgan Keene) as “Katherine Plumber”,
Steve Blanchard as “Joseph Pulitzer”,
Zachary Sayle (later Andy Richardson) as “Crutchie”,
Angela Grovey (later Aisha de Haas) as “Medda Larkin”,
Jacob Kemp as “Davey”,
Jeff Heimbrock as “Spot”,
& more.
Towards the end of the tour, the final show in LA was captured on film for a theatrical release from Disney and Fathom Events release and available now on Amazon. The filmed performance was at the Hollywood Pantages Theatre. With Jeff Calhoun and Christopher Gattelli on board, the filmed performance featured the majority of the original cast from Broadway reprising their roles joined on stage with several of the tour cast members including…
Jeremy Jordan as “Jack Kelly”,
Kara Lindsay as “Katherine Plumber”,
Steve Blanchard as “Joseph Pulitzer”,
Andrew-Keenan Bolger,
Aisha de Haas as “Medda Larkin”,
Ben Fankhauser as “Davy”,
Tommy Bracco as “Spot”,
and more.
Currently, the licensing is now available for all FANSIES to put on their own productions of NEWSIES worldwide. Productions are being played everywhere from Schools, Community, and Regional Theaters all over.
Doesn’t this show make you wanna join in the fight?!!
#TonyAwards #CountdownToTheTonys #NYBTTop50TonyAwardsCountdown #BroadwaysBiggestNight #BroadwaysBack #TheShowMustGoOn #ThisIsBroadway
Newsies – Tony Awards 2012 – YouTube