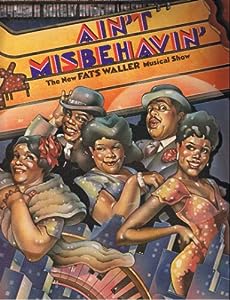 RISE & SHINE SUPER BROADWAY FANS EVERYONE! Today marks 48 DAYS till we celebrate Broadway’s biggest night of the year….. The 74th Annual Tony Awards. Been a rough past year and a half without Live Theater. However, the Great Bright Way is making its comeback and we are celebrating with our TOP 50 TONY AWARDS COUNTDOWN. With Broadway’s return, this community has come together to celebrate the art Live Theater is & what can we do to make it a BRIGHTER BROADWAY…… especially when it comes to diversity. Are you ready for more of Broadway’s best?!!!
Speaking of diversity, our choice at # 48 on our countdown takes us to the New York City cabaret and jazz club scene…. 1940’s era. That classic big band era playing the latest hottest beat called swing. This particular show celebrates that legacy. This is AIN’T MISBEHAVIN’. This musical is a revue celebrating the music of the acclaimed jazz entertainer Fats Waller (which the show is named after his famous song). It also includes a book by Murray Horwitz and Richard Maltby Jr.,
From the 1978 telecast, the legendary talents of Tony winners André De Shields and the late Nell Carter along with Ken Page, Tony nominee Charlayne Woodard, and the late Armelia McQueen perform a toe-tapping medley of LADIES WHO SING WITH THE BAND and OFF-TIME.
AIN’T MISBEHAVIN’ originally premiered in February of 1978 as a cabaret act part of Manhattan Theatre Club’s former East 73rd Street cabaret space. It earned so much critical praise that the full show was expanded into a full-scale Broadway production. It immediately moved to the Great Bright Way in the Spring of that very same year opening at Broadway’s Longacre Theatre before transferring to the Plymouth Theatre (now the Gerald Schoenfeld Theatre) and the Belasco Theatre. It ran for a complete total of 1,618 performances. Under the direction of Richard Maltby Jr. and choreographed by Arthur Faria, the cast was led by…..
Andre DeShields,
the late Nell Carter,
Ken Page,
Charlayne Woodward,
and
Armelia McQueen.
The original production was nominated for 5 Tony Awards that very same year winning 3 for BEST MUSICAL, BEST FEATURED ACTRESS IN A MUSICAL (for Nell Carter), and BEST DIRECTION OF A MUSICAL (for Richard Maltby Jr). It also won various other Awards including being the recipient of 2 Theatre World Awards and the Drama Desk for OUTSTANDING MUSICAL.
The show would eventually debut overseas in London’s West End in 1979.
AIN’T MISBEHAVIN’ was later revived on Broadway in 1988 at the Ambassador Theatre for a strictly limited engagement of 184 performances. It reunited BOTH the full creative team and original cast, all reprising their performances.
That remounted revival would be nominated for a Tony Award again that same year for BEST REVIVAL OF A MUSICAL but lost the category.
It later launched several National Tours both in 1995 (that almost went to Broadway) and then later in 2008 commemorating the show’s 30th Anniversary.
Along with its success on stage, AIN’T MISBEHAVIN’ was also captured on film. In 1982 filmed the show directly for television with the original cast and aired on NBC, It was well received being nominated for 8 Primetime Emmy Awards that year. It took home 2 for INDIVIDUAL PERFORMANCE IN A VARIETY OR MUSIC PROGRAM (both for Nell Carter and Andre De Shields).
Today, there have been productions of AIN’T MISBEHAVIN’ produced in Regional Theaters and around the world.
How soulful and toe-tapping was that performance?
Ain’t Misbehavin’ 1978 Tony Awards – YouTube
#TonyAwards #CountdownToTheTonys #NYBTTop50TonyAwardsCountdown #BroadwaysBiggestNight #BroadwaysBack #TheShowMustGoOn #ThisIsBroadway #livetheaterreturns