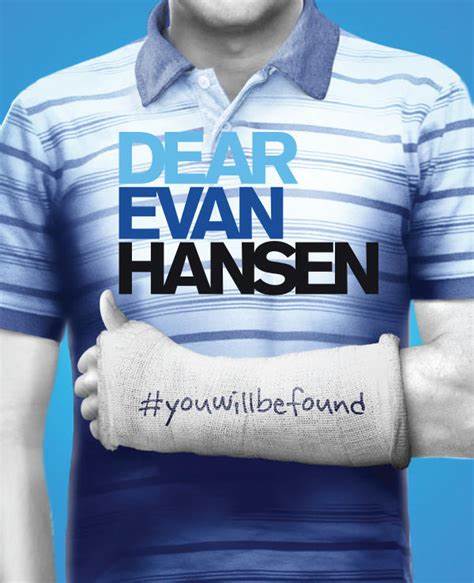 GOOD MORNING BROADWAY FANS! Today is gonna be an exciting day and here’s why….. We are just 1 WEEK AWAY from Broadway’s biggest night. Can you believe its 7 days till The 74th Annual Tony Awards?!!! We at New York Broadway Tours have more of your favorite iconic performances coming your way on our TOP 50 TONY AWARDS COUNTDOWN
At # 7 on our countdown, we have one of the most powerful, groundbreaking, and inspirational shows out there. It tells the story of a young High School outcast who finds himself in the center of something that was not to be seen by the Public and a lie that was never meant to be told. This is Dear Evan Hansen. The show features a score by Benj Pasek and Justin Paul along with a book by Steven Levenson.
From the 2017 telecast, here is the musical’s iconic Tony Award winning star Ben Platt and the original Broadway cast performing one of the show’s most beloved signature underdog anthems WAVING THROUGH A WINDOW.
DEAR EVAN HANSEN was originally inspired by a real incident from Benj Pasek years in High School where a troubled teenager was found dead due to drug problems and all of a sudden, he had more mourners in death than friends in real life. The incident always came back to Pasek, he along with his collaborator Justin Paul began to create a full musical inspired by that tragic event. They decided to tell the story following an outcast with social anxiety and mental illness be in the center of it all. The show was then passed on to director Michael Grief who fell in love with the piece. From there, the show went through many years of readings and workshops.
The show originally premiered in 2015 at Arena Stage in Washington D.C. before making its way Off Broadway playing Second Stage Theater in the Spring of 2016. The response of the Off Broadway run was well received by critics and audiences, the show was then transferred to Broadway’s Music Box Theatre before becoming one of Broadway’s most popular hottest tickets.
Under the direction of Michael Grief, the cast consisted of…
Tony winner Ben Platt (later Noah Galvin, Taylor Trensch, Andrew Barth Feldman, and Jordan Fisher) as “Evan Hansen”,
Tony winner Rachel Bay Jones (later Lisa Brescia and Jessica Phillips) as “Heidi Hansen”,
Laura Dreyfuss (later, Mallory Bechtel and Gabrielle Carrubba) as “Zoe Murphy”,
Tony nominee Mike Faist (later Alex Boniello and David Jeffery) as “Connor Murphy”,
Will Roland (later Sky Lakota-Lynch and Jared Goldsmith) as “Jared Kleinman”,
Kristolyn Lloyd (later Phoenix Best, Samantha Williams, and Pheobe Koyabe) as “Alana Beck”,
Tony nominee Jennifer Laura Thompson (later Ann Sanders and Christiane Noll) as “Cynthia Murphy”,
and
Michael Parks (later Ivan Hernandez) as “Larry Murphy”.
The show was nominated for 9 Tony Awards in 2017 winning 6 including BEST MUSICAL, BEST ORIGINAL SCORE (for Pasek and Paul), and BEST LEADING ACTOR IN A MUSICAL (for Ben Platt). It’s Original Broadway Cast Recording also went on to win the Grammy Award for BEST MUSICAL THEATRE ALBUM.
Along with Broadway, DEAR EVAN HANSEN was playing to packed houses all over North America with its current National Tour, on a North American National Tour, and most recently made its UK Debut in London’s West End (where it just took home the Olivier for BEST NEW MUSICAL).
The show continued to sell out every night on Broadway and around the world until it was abruptly shutdown due to the COVID-19 pandemic. However, it is coming back this Fall. The Broadway production will reopen at the Music Box Theatre starting December 11th, 2021. The London company reopens at the Noel Coward Theatre starting October 26th, 2021. From there, the North American National Tour will re-kick off December 7th, 2021 in Greensboro, NC before traveling to more than 30 cities across both the USA and and Canada.
In addition to its success on stage, the musical is about to inspire audiences on the big screen. The film adaptation is set to come out THIS FRIDAY, September 24th, 2021 in Theaters everywhere. Produced by Universal Pictures, Marc Platt and Adam Siegel, and directed by Stephen Chbosky, the film will feature a full all-star cast led by….
Ben Platt reprising his Tony winning performance of the title role,
Oscar, Emmy, and Golden Globe winner Julianne Moore as “Heidi Hansen”,
Golden Globe nominee Kaitlin Dever as “Zoe Murphy”,
Oscar nominee Amy Adams as “Cynthia Murphy”,
Colton Ryan as “Connor Murphy” (a part he previously understudied in the Broadway production),
Acclaimed actress and singer Amandla Stenberg as “Alana Beck”,
Acclaimed actor and comedian Nik Dodani as “Jared Kleinman”,
&
Danny Pino as “Larry” (who is now updated as the stepfather of “The Murphy Family”),
The new film will have some unique updates including brand new Ensemble characters created specifically for the film. It also will feature 2 new original songs written for the film by Pasek and Paul along with all the beloved hits from the musical.
DEAR EVAN HANSEN is a celebration of everyone.
Doesn’t this show make you really care for the underdogs who feel like they don’t have a voice?
#TonyAwards #CountdownToTheTonys #BroadwaysBiggestNight #NYBTTop50TonyAwardsCountdown #ThisIsBroadway
Waving Through A Window – Dear Evan Hansen (Live at Tony Awards 2017 ) – YouTube