ON THE MARQUEE: LIGHTS UP on another Lin-Manuel Miranda hot ticket heading for THE GR

ON THE MARQUEE: LIGHTS UP on another Lin-Manuel Miranda hot ticket heading for THE GREATEST CITY IN THE WORLD. While developing his debut breakout show In the Heights and long before Hamilton, the Award winning composser, writer, actor, singer, and rapper was part of unique improvisational hip hop and rapping called Freestyle Love Supreme. And now, they're heading for Broadway this Fall. Today, Broadway's Booth Theater put up right outside the all new front of house billboard. 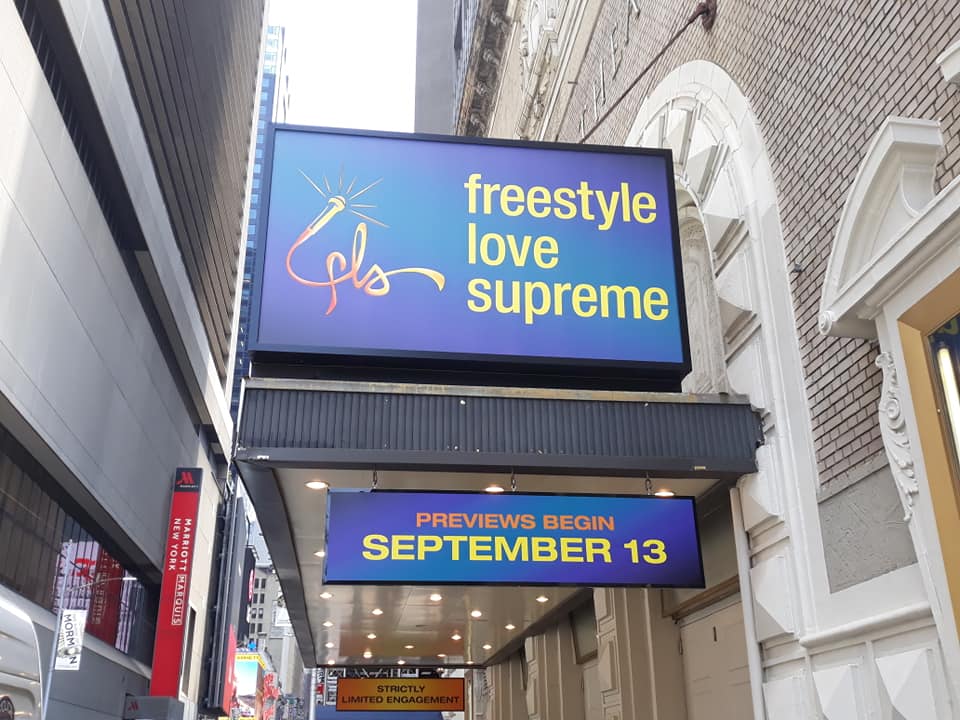 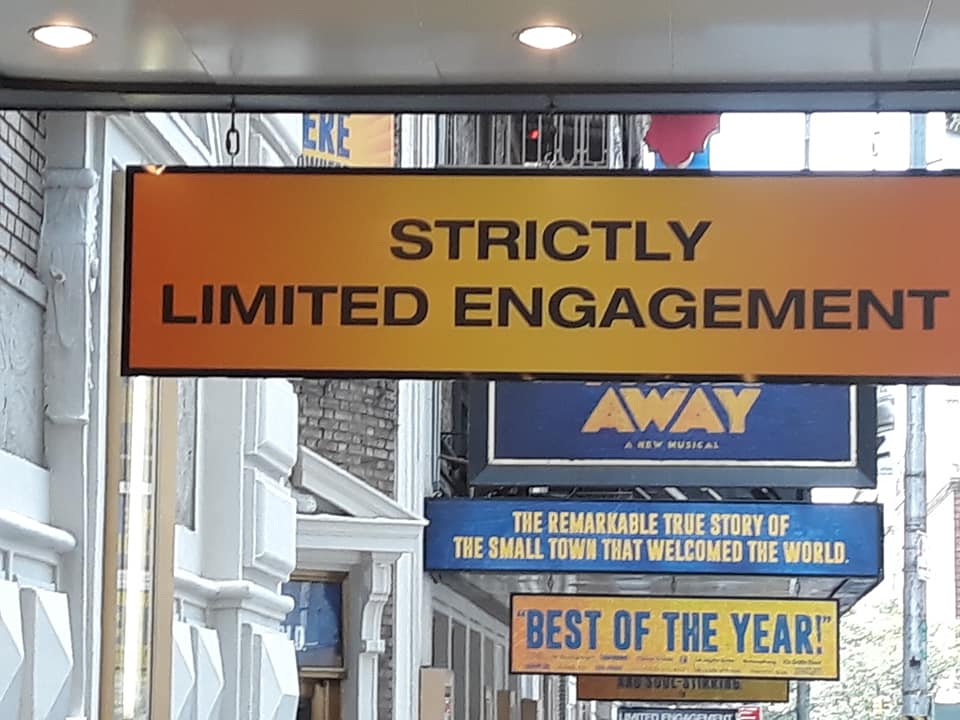 LIGHTS UP on another Lin-Manuel Miranda hot ticket heading for the Great White Way. W 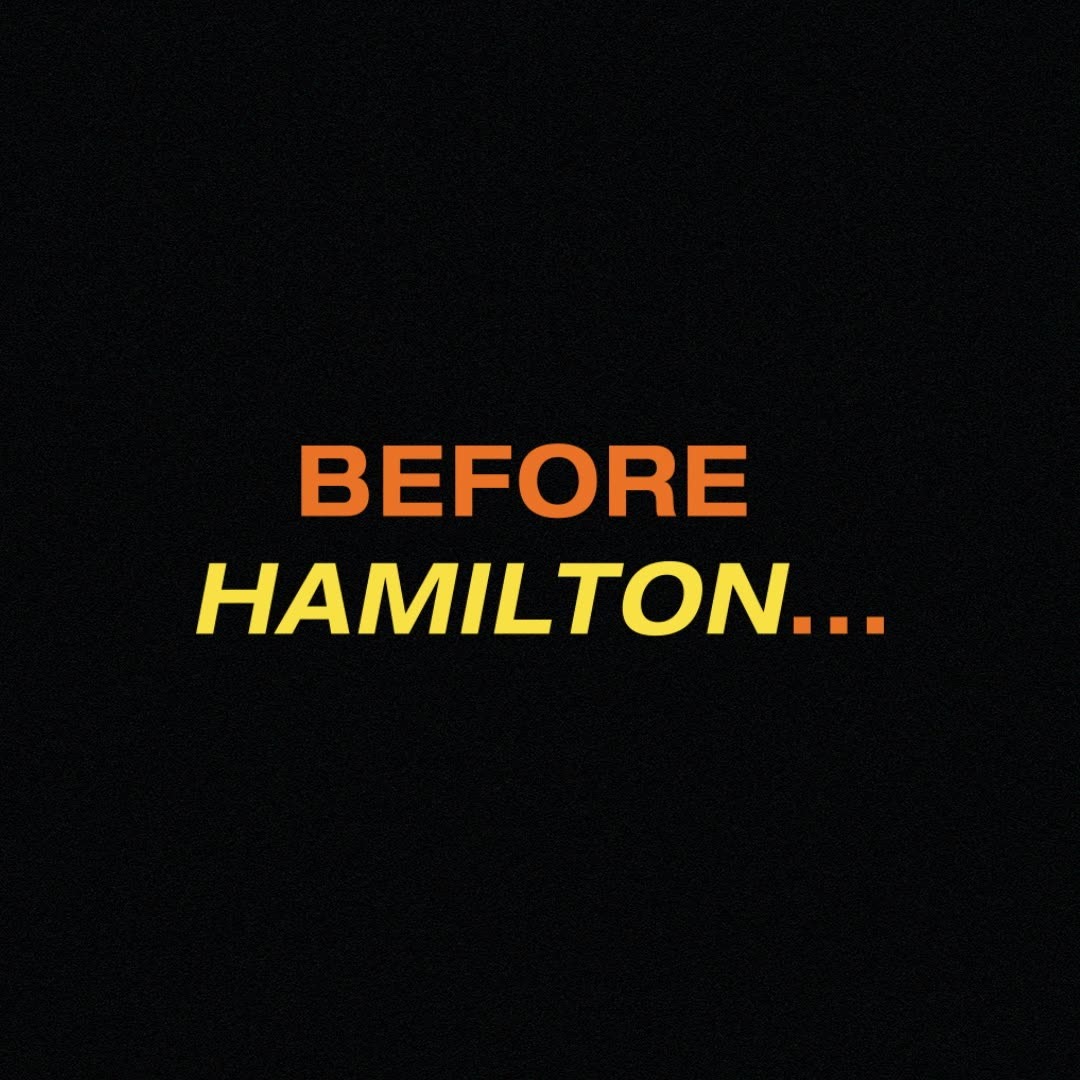 LIGHTS UP on another Lin-Manuel Miranda hot ticket heading for the Great White Way. While appearing on The Tonight Show Starring Jimmy Fallon earlier this week, the Hamilton and In the Heights creator announced that his freestyle hip-hop group Freestyle Love Supreme will be heading to Broadway this…

Freestyle Love Supreme is coming to Broadway this fall and tickets are on sale NOW through June 28 at 9:59AM for American Express holders. Tickets will go on sale to the general public on July 9.

Last night at the dimming of the lights for the late Carol Channing, Michael got to m

Last night at the dimming of the lights for the late Carol Channing, Michael got to meet Lisa Carroll. For those who may not know, Lisa was Carol’s standby in the original production of Hello, Dolly on Broadway.

Tonight, Broadway dimmed all their marquee lights to honor the late Carol Channing (the iconic original leading lady of Hello, Dolly on Broadway). What an incredible performance and she will be missed. RIP

BREAKING NEWS: After 2 1/2 years dark, the Helen Hayes Theatre has officially been renovated and reopened. It was brought by Second Stage Theater in 2015 going under a full renovation. With the 44th Street house reopen, it will now be known as Second Stage on Broadway.

To celebrate the newly renovated house back and running, Second Stage presented a star studded Grand Reopening ceremony. In addition, the mayor of New York declared today as Second Stage on Broadway Day!!!

The Helen Hayes Theatre which seats 597 people originally opened in 1912. The architect design was done by Harry Creighton Ingalls and built by Winthrop Ames. It’s design was to look like a Victorian house in New England. It’s original name was actually called The Little Theatre which initially seated 300 people (and technically considered as an Off Broadway house). It was made for more intimate and smaller productions.

It opened with production of John Galsworthy’s play The Pigeon and later included more shows that played short runs all in that same year including Charles Rann Kennedy’s plays The Terrible Meek and The Flower of the Palace of Hans.

Later on in the 1920’s, Herbert J. Krapp (acclaimed architect who designed most of the houses of Broadway that are still up today) incorporated Mezzanine seating into the house which then increased the amount of seating from 300 to 590 people.

A few years later, Ames was forced to sell The Little Theatre which was turned into a television studio becoming home of The Merv Griffen Show, The Dick Clark Show, and The David Frost Show.

Then in 1978, the Westinghouse organization sold the studio to independent salesman Marty Markinson and Donald Tick turning it back into a Broadway Theatre

The first show that reopened the Little Theatre in 1982 was the risqu? but successful Off Broadway hit Torch Song Trilogy which was written and starring Harvey Fierstein in his Broadway debut.

In 1982, the Little Theatre was renamed the Helen Hayes Theatre after the first lady of American Theatre herself Helen Hayes.

Some of the later shows that came into the Helen Hayes was a huge lineup of successful musicals and plays including Romance/Romance, Prelude to a Kiss (starring Mary-Louise Parker), Artist Descending a Staircase, The Last Night of Ballyhoo, Epic Proportions (starring Kristin Chenoweth), Golda’s Balcony (starring Tovah Feldshuh), Jay Johnson: The Two and Only, Xanadu – the musical (starring Kerry Butler, Cheyenne Jackson, and Mary Testa), The 39 Steps, the Tony nominated rock musical comedy Rock of Ages, and Dames At Sea Broadway.

The last show to have played the Helen Hayes before it began it’s 2 year renovation project was the 2016 Tony winning smash hit The Humans Play.

As the Theater is now officially reopened, we are so excited to welcome the first show coming in which will be a revival of the Kenneth Lonergan’s 2001 Off Broadway hit Lobby Hero (starring Michael Cera, Chris Evans, Brian Tyree Henry, and Bel Powley). Previews will begin March 1st, 2018 and Opening Night set for March 26th, 2018 running for only 10 weeks till May 13th, 2018.

Welcome Back Helen Hayes and Congratulations to Second Stage for bringing this landmark house back all new.

What is your favorite show that has played the Helen Hayes?

FUN FACT: The original Helen Hayes Theatre was initially on West 46th Street (mostly well known as The Fulton Theatre) but was demolished in 1982 to make way for the New York Marriott Marquis (where the Marquis Theatre is).