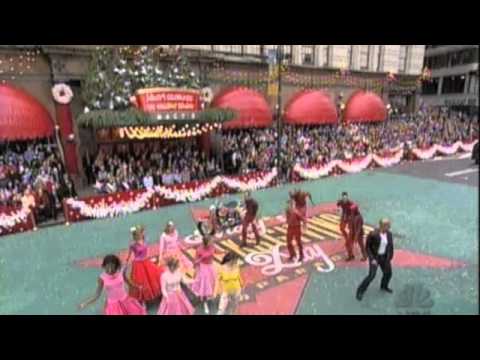 YO BROADWAY FANS! We are only 11 days away from kicking off the holiday season with The 90th Annual Macy’s Thanksgiving Day Parade and our TOP 20 BROADWAY AT THE MACY’S PARADE countdown continues playing you the best showstopping performances from the NBC and CBS telecasts.

At #11 on our countdown, It’s life in the Midwest in the 1950’s and the music is all from the King of Rock N’ Roll himself ELVIS PRESLEY. This is All Shook Up.

From the 2004 NBC telecast (prior to it’s 2005 Broadway debut), Broadway favorites Cheyenne Jackson as Chad, Jenn Gambatese as Natalie, and the cast rock out in Harold Square for a medley of LOVE ME TENDER and the show’s finale BURNING LOVE.

ALL SHOOK UP played Broadway’s Palace Theatre for 246 performances. It is continued to be performed in schools, community, and regional Theatres. In 2015, the show embarked on a UK premiere tour and now goes by the name LOVE ME TENDER.

Doesn’t this performance make you want to rock?

Cheyenne Jackson, Jenn Gambatese and the cast of ALL SHOOK UP perform of “Love Me Tender” and “Burnin’ Love” at the Macy’s Thanksgiving Day Parade. Featuring…