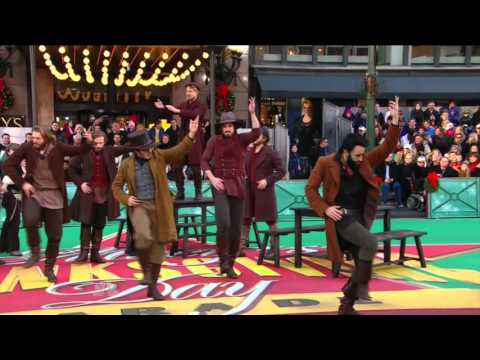 IT’S ALMOST TIME TO CELEBRATE BROADWAY FANS. The 90th Annual Macy’s Thanksgiving Day Parade kicking off the holiday season is 3 days away. Our TOP 20 BROADWAY AT THE MACY’S PARADE COUNTDOWN continues playing you the best of performances from the past NBC and CBS telecasts.

At #3, we take you into the small Village of Anevteva where traditions continue to live on. This is of course the classic musical Fiddler on the Roof.

From the 2015 NBC telecast, Tony nominee Danny Burnstein as the beloved milkman Tevye and the cast of the current revival perform the classic drinking showstopper from Harold Square TO LIFE.

FIDDLER ON THE ROOF (based on Sholem Aleichem’s novel Teyve and his Daughters) originally premiered on Broadway in 1964 playing the Imperial Theatre (later transferring to the Majestic Theatre and the Broadway Theatre) running for a record-setting total of 3,242 performances. It later was revived in 1976 for 176 performances at the Winter Garden Theatre, in 1981 at Lincoln Center for 53 performances, in 1990 at the Gershwin Theatre (starring the film’s leading man Chaim Topol) for 241 performances, in 2004 at the Minskoff Theatre (starring Alfred Molina and later Harvey Fierstein) for 816 performances, and currently back at the Broadway Theatre with a new 50th Anniversary production. The current revival is set to close on New Year’s Eve (December 31st, 2016) after a total of 464 performances.

Let’s raise a glass TO LIFE!!