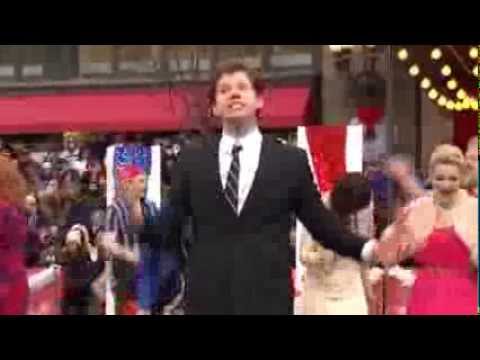 HEY BROADWAY FANS, It’s almost here. We are 8 days away from New York’s MIRACLE ON 34TH STREET itself, The 90th Annual Macy’s Thanksgiving Day Parade kicking off the Holiday season. We are continuing with our TOP 20 BROADWAY AT THE MACY’S PARADE COUNTDOWN with some of your favorite toe tapping Musical Theatre performances from the past NBC and CBS telecasts.

At #8, we are taken to a struggling London shoe factory trying to make the ultimate shoe to sell. Along comes a drag queen and helps make that wish a reality. This is of course Harvey Fierstein and Cyndi Lauper’s Award winning smash hit Kinky Boots on Broadway.

From the 2013 telecast, original cast members Tony winner Billy Porter as Lola, Tony nominee Stark Sands as Charlie, future Tony winners Annaleigh Ashford as Lauren and Lena Hall as Nicola, and the original cast present their spectacular new KINKY BOOTS (joint by Price & Son, and THE LAND OF LOLA) in Harold Square for a performance of the showstopping finale RAISE YOU UP / JUST BE.

KINKY BOOTS (based on a true story and the acclaimed 2005 British film of the same name) premiered on Broadway in 2013 at the Al Hirschfeld Theatre where it continues to play to packed houses every night. So far, it has played way over 1,000 performances. It also continues to be performed around the world including on Tour Across America, London’s West End (where it took home the Olivier Award for Best New Musical this year), Australia, Japan, Korea, and more.

FUN FACT: This KINKY BOOTS performance at the Macy’s Thanksgiving Day Parade was met with a little controversy from viewers saying it was very inappropriate to put the show in for a family/friendly event and special (since the show includes drag queens and sexy attire). Co-writer and Broadway favorite Harvey Fierstein explained to the press about the parade performance is supposed to reflect on decreasing prejudice and increased tolerance for LGBT people in society.

If you enjoyed this performance, SAY YEAH!!!

The cast of the Broadway musical KINKY BOOTS perform the show’s finale “Raise You Up/Just Be”, live at the 2013 Macy’s Thanksgiving Day Parade