ON THE MARQUEE: Nothing like waking up to that delicious taste of BROADWAY’S BACK BLUEBERRY PIE as the current encore engagement of the Tony & Grammy nominated smash hit Waitress the Musical continues to play to packed houses every night.
Most recently, the show just welcomed Grammy Award winner Jennifer Nettles as she continues to play a month long run as pregnant pie maker “Jenna Hunterson”. She continues with the production now through November 24th, 2021.
Get a look at the front of house billboards outside the show’s home at the Ethel Barrymore Theatre featuring Nettles in costume. Yes, it includes tons of pie.
Following Nettles departure, it was recently announced that the very next day (Thanksgiving), Broadway veteran Ciara Renee will don the blue uniform and white apron as “Jenna”.
This limited engagement revival of WAITRESS continues to run now till January 9th, 2022.
How delicious is that?

ON THE MARQUEE: Things once again with Broadway are getting NICE AND ROOOUGH as the Tony winning and Olivier Award nominated smash hit Tina: The Tina Turner Musical is back. Earlier this past week, the show had a very exciting cast change as Nkeki Obi-Melekwe has replaced the show’s OG star Tony winner Adrienne Warren in the titular role.
It also includes a brand new update to the show’s front of house billboards outside of Broadway’s Lunt-Fontanne Theatre. Yup, it includes a photo of Nkeki in action rocking out as THE QUEEN OF ROCK N’ ROLL herself.
This is a full circle moment for Nkeki Obi-Melekwe. The newcomer originally replaced Warren in the show’s inaugural London production for a few months. Immediately afterwards, she joined Warren in the Broadway company serving as the alternate performing twice a week. Now, she is main full time star 6 times a week.
Taking over also now from Nkeki as the alternate is original Ensemble member and Broadway veteran Kayla Davison.
SIMPLY THE BEST!!!
How amazing is this?!

ALL RISE!!! Emmy winner Academy Award nominee Greg Kinnear is set to join the cast of the powerful Broadway production of To Kill a Mockingbird next year. Beginning January 5th, 2022 at the Shubert Theatre, the actor (best known for his roles in Talk Soup, As Good As It Gets, The Kennedys and Modern Family) will take over the role of head lawyer “Atticus Finch”.
Kinnear succeeds original and returning leading man Emmy winner and Tony nominee Jeff Daniels who will end his limited engagement on January 2nd, 2022.
Who is excited?!!
Oscar Nominee Greg Kinnear to Make Broadway Debut in To Kill a Mockingbird in January | Broadway Buzz | Broadway.com

I HAVE BEEN CHANGED FOR GOOD! Award winners Cynthia Erivo and Ariana Grande to BEWITCH movie audiences in WICKED film!!! THRILLIFYING NEWS: The wait is almost over for the highly anticipated film adaptation of the Award winning smash hit WICKED. Under the direction of Jon M. Chu and produced by Universal Pictures, it has just been revealed that Broadway veterans….
Tony winner and Oscar nominee Cynthia Erivo (The Color Purple)
and
Grammy Award winner Ariana Grande (13)
… have both been tapped to play opposite each other as the best friends that grow up to be the famous WITCHES OF OZ themselves.
Erivo will play the smart, fiery, misunderstood, and not so-WICKED WITCH OF THE WEST herself “Elphaba”
and
Grande (who is a lifelong super # 1 WICKED fan since DAY 1 & has sung the music all throughout her career) will take on the role of the beautiful, blonde, and POPULAR Good Witch herself “Glinda”.
Both performers announced taking part in the film via their Instagram accounts sharing their excitement.
Filming is expecting to begin Summer 2022.
Thoughts?!!
Who is excited?!!
Ariana Grande & Cynthia Erivo To Star In Universal’s Musical ‘Wicked’ (msn.com)

Casting for US premiere of EVERYBODY’S TALKING ABOUT JAMIE announced; Full cast made up of performers from all the UK productions 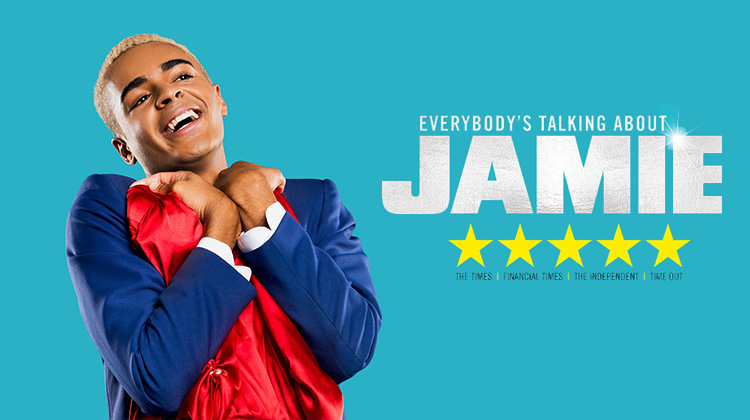 America, get ready to step back into the SPOTLIGHT as the Olivier Award nominated smash hit Everybody’s Talking About Jamie has revealed its casting for the upcoming North American premiere next year. AND YOU DON’T EVEN KNOW the big part of it…. the cast itself is a group of actors making their way from across the pond to our US backyard. Yup, they ALL APPEARED in the show’s inaugural production in London’s West End, the UK Tour, and some from the recent film adaptation that just came out!!!
Under the direction of Jonathan Butterell, the cast will include…
Melissa Jacques in the role of supportive and appreciative mother “Margret New”
Shobna Gulati as supportive family friend “Ray”,
Gillian Ford as the arrogant and un-encouraging careers teacher “Miss Hedge”,
Hiba Elchikhe as caring BFF “Pritti Pasha”,
George Sampson as school bully “Dean Paxton”,
Marlon G. Day as the disapproving father “Mr. New”,
and
a Full Ensemble.
This LA cast all coming from the UK joins the previously announced talents of…
Layton Williams who starts in the titular role of THE BOY IN THE DRESS himself “Jamie New”
and
Roy Haylock (best known as the one and only Bianca Del Rio) as “Hugo” and alter-ego “Loco Chanelle”.
EVERYBODY’S TALKING ABOUT JAMIE is set make its North American debut at the Ahmanson Theatre in Los Angeles, CA. It will run for a limited engagement from January 16th-February 20th, 2022.
The show is currently on a leave of absence from London’s West End where it was playing to packed houses at the Apollo Theatre. It’s expecting to return there in 2022. However, it’s currently being performed on tour across the UK. Talks for a Broadway run are still in the works as well.
Who is excited?!!
See Who’s Joining Layton Williams and Roy Haylock in Los Angeles Bow of Everybody’s Talking About Jamie | Playbill

We’re celebrating the return of Broadway all Fall along. However, it does not mean we are free from what has happened within this past year and a half. Our Theater scene just like the rest of the world are continuing to follow current ongoing COVID-19 safety guidelines.
One of the many shows that just returned is the groundbreaking Award winning smash hit 9/11 musical Come From Away. Earlier today, the Broadway company made Healthy & Safety Protocol video (done in the style you would see when you’re flying on a plane). This is all to make the best of your experience to be back at THE ROCK in a protected matter.
How great was that?!!
« Older Entries