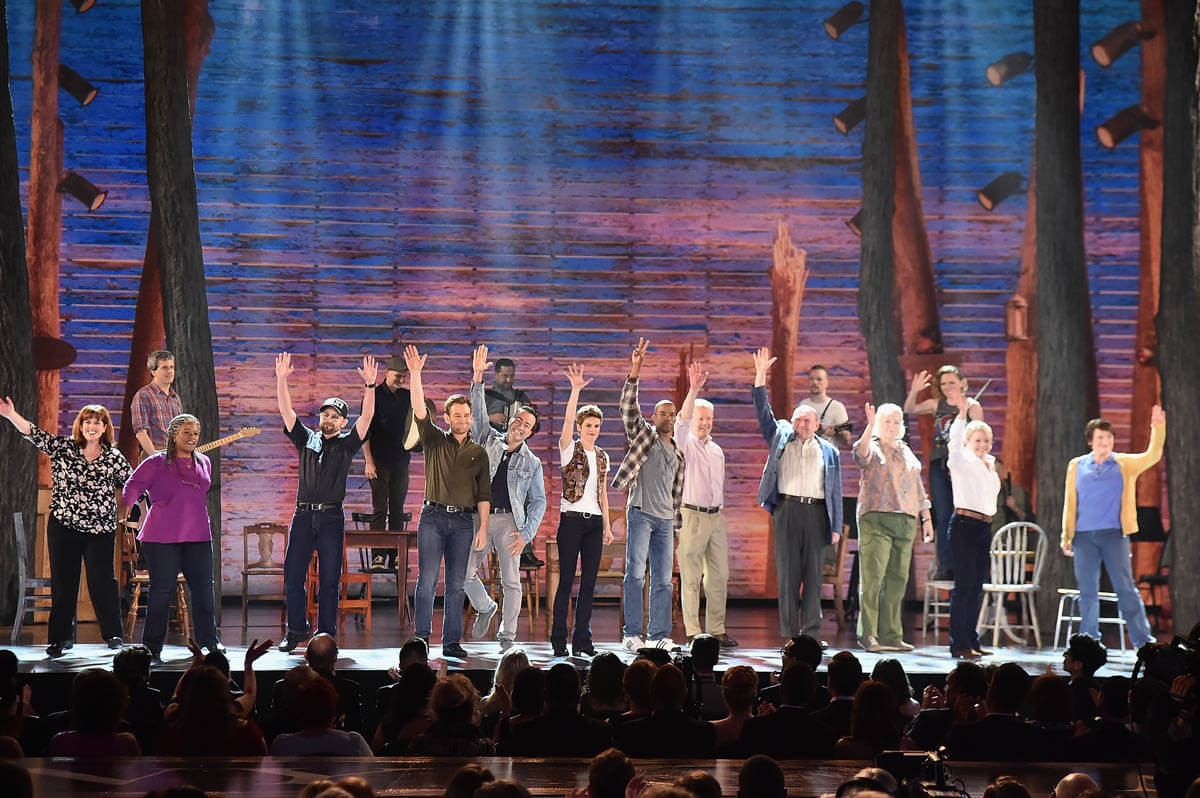 RISE & SHINE BROADWAY FANS! The days continue to get closer as we celebrate Broadway’s biggest night just 12 DAYS AWAY. We of course are talking about The 74th Annual Tony Awards. We have more iconic legendary performances coming up on our TOP 50 TONY AWARDS COUNTDOWN. Truly the ultimate celebration of welcoming back Live Theater’s return. Are you ready for more?
At # 12 on our countdown, we chose a groundbreaking powerful story inspired by what happened on the day we NEVER FORGET 20 years ago. It follows a community of people on a small Canadian Island (called Gander) as they take care of over 7,000 strangers from all points of the earth during the September 11th, 2001 terrorist attacks. This is Come From Away. The show features a score and a book by husband and wife duo Irene Carl Sankoff and David Hein.
From the 2017 telecast, here is the full original Broadway cast singing the show’s opening number WELCOME TO THE ROCK. .
COME FROM AWAY was first conceived by Lawyer and Theater producer Michael Rubinoff. He was inspired by the story of how the entire community of Gander, Newfoundland welcomed the stranded passengers into their homes during September 11th, 2001 for a whole week till it was safe to go back up into the air. He tried to pitch the idea to many numerous Canadian musical theatre writers to no avail. Luckily at the same time in 2009, an new original musical entitled My Mother’s Lesbian Jewish Wiccan Wedding just opened. It was getting tons of buzz from the Toronto Fringe Festival and was transferred to the Panasonic Theatre. Rubinoff got the autobiographical musical’s composer husband and wife duo Irene Sankoff and David Hein on board for the new musical. From there, the team went straight to work. In 2011, Sankoff and Hein traveled to Gander, Newfoundland on the 10th Anniversary of the 9/11 terror attacks. There, they got to meet and interview many of the locals and the passengers that were stranded (who returned for the Anniversary) to share their stories and experiences on what it was like during the long week of the most difficult time in world history. The couple took many of the stories turning them directly into music while others were merged for story purposes. From there, the show went on to be developed for 3 1/2 years, Many readings and workshops for the show were done through the The The Canadian Music Theatre Project at Sheridan College, Goodspeed Musicals, and the National Alliance for Musical Theatre.
It officially had its world premiere engagements in 2015 playing Seattle, Washington at both the The 5th Avenue Theatre and the Seattle Repertory Theatre. Both runs earned critical praise and extensions. From there, the show embarked for a pre-Broadway tour in the Fall of 2016. The Pre-Broadway tour played engagements at the Ford’s Theatre in Washington, D.C. and the Royal Alexandra Theatre in Toronto, Ontario, The Toronto engagement sold out by the 2nd week of performances selling over $1.7 million in tickets in a single week.
The company also performed a special benefit concert version in the actual town of Gander at the Steele Community Centre as a tribute to the inspirational people there. Many of the residents and the passengers who were grounded during that crazy time were an emotional mess to hear their stories told by performers.
From there, the show officially made its way to the Great Bright Way playing the Gerald Schoenfeld Theatre where it was still playing to packed houses. At the time of the COVID-19 pandemic when it shutdown, the show was initially set to celebrate its 3rd Anniversary performance that evening. It is set to relaunch its Broadway run there on September 21st, 2021.
Under the direction of Christopher Ashley, the cast was led by….
Tony nominee Chad Kimball (later Tony LePage and James Seol) as Garth”, “Kevin Tuerff”, and others,
Tony nominee Jenn Colella (later Becky Gulsvig and currently Rachel Tucker) as “Captain Beverly Bass” (the first female pilot EVER for American Airlines), Annette”, and others,
Joel Hatch as “Claude Elliott” and others,
Rodney Hicks (later and now De’Lon Grant) as “Bob” and others,
Caesar Samayoa as “Ali”, “Kevin Jung” and others,
Kendra Kassebaum (later Alex Finke, Emily Walton, and Pearl Sun) as “Janice Mosher” and others,
Petrina Bromley (later Pearl Sun) as “Bonnie Harris” and others,
Geno Carr (later and now Paul Whitty) as “Oz Fudge” and others,
Lee MacDougall (later and now Jim Walton) as “Doug”, “Nick Marson” and others,
Q. Smith (later and now Kenita R. Smith) as “Hannah O’Rourke” and others,
Sharon Donaldson-Wheatley as “Diane Gray” and others,
and
Astrid Van Wieren as “Beulah Davis” and others.
COME FROM AWAY went on to be nominated for 7 Tony Awards in 2017. It took home only 1 for BEST DIRECTION OF A MUSICAL (for Christopher Ashley).
With the success of Broadway, COME FROM AWAY continues to move audiences everywhere. It’s currently a worldwide phenomenon. Productions are currently being performed all over including….
a sit-down company in Toronto (which the producers planned immediately following the closing of the Pre-Broadway run there),
on Tour all across North America (set to relaunch also later this Fall),
in London’s West End (where it took home the Olivier for BEST NEW MUSICAL) which reopened this past Summer,
in Australia,
and more.
Along with its success on stage, COME FROM AWAY was recently released as a professionally captured proshot. It was released this past Friday on Apple TV+. Filmed on the stage of the Gerald Schonefeld Theatre in front of a private audience of Frontline Workers, it included veteran original and replacement cast members combined.
This show is truly a celebration of community even in the most difficult times.
How beautiful was that performance musical?!!
#TonyAwards #CountdownToTheTonys #NYBTTop50TonyAwardsCountdown #BroadwaysBiggestNight #BroadwaysBack #TheShowMustGoOn
“Welcome to the Rock” — Come From Away, Tonys 2017 performance – YouTube