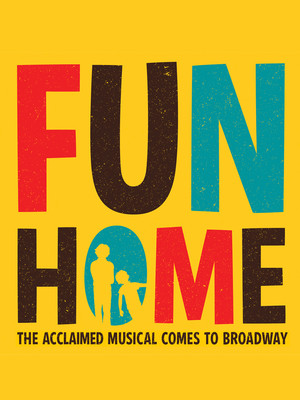 GOOD MORNING BROADWAY FANS!! Just another day celebrating the return of the Great Bright Way after 18 months of being shutdown. We are continuing to countdown to Broadway’s Biggest Night just 14 DAYS AWAY…. We are talking about the 74th Annual Tony Awards. Our TOP 50 TONY AWARDS COUNTDOWN continues with more legendary performances.
At # 14 on our countdown, we take you to Pennsylvania where we meet a dysfunctional family BOTH living and working at a funeral home. Mainly, it centers on a coming-of-age woman discovering her sexuality her complicated relationship with her family, and more. This is a day at the…… Fun Home. Based on Allison Bechdel’s autobiographical graphic novel of the same name, it features an original score and book by Jeanine Tesori and Lisa Kron. It also made history as the first Broadway show to have a Lesbian serve as the protagonist.
From the 2015 telecast, Tony nominee Sydney Lucas as “Small Allison” along with Tony winner Michael Ceveris as “Bruce Bechdel” and Tony nominee Beth Malone as “Adult Allison” perform the musical’s powerhouse ballad RING OF KEYS.
FUN HOME was first conceived in 2007 just a year after following the success of Allison Bechdel’s 2006 graphic novel of the same name which was well received by book readers everywhere. It was developed through a full course of over 5 1/2 years through various readings and workshops. The development labs were held in both California and New York City at the Ojai Playwrights Conference, Sundance Institute’s Theater Lab, and The Public Theater. Through the labs, the story began to evolve and went through numerous changes in the story and the score. For Allison Bechdel herself, she did not participate in the musical’s development labs. She expected her story to seem artificial and distant on stage, but she came to feel that the musical had the opposite effect, bringing the “emotional heart” of the story closer than even her book did.
FUN HOME officially had its world premiere production Off Broadway at The Public Theater in the Fall of 2013. It was well received by both critics and audiences alike, it was extended 3 TIMES running until January 2014. Under the direction of Sam Gold, the original production cast featured….
Tony winner Michael Ceveris as “Bruce Bechdel”,
Tony nominee Judy Kuhn as “Helen Bechdel”,
Tony nominee Beth Malone as “Adult Allison Bechdel”,
Tony nominee Sydney Lucas as “Small Allison Bechdel”,
Alexandra Socha as “Medium Allison Bechdel”,
Griffin Birney as “Christian Bechdel”,
Noah Hinsdale as “John Bechdel”,
Roberta Colindrez as “Joan”,
and
Joel Perez as “Roy”, “Mark” “Pete”, and others.
The Off Broadway run took home various Awards including the Obie and the The Lucille Lortel Award for BEST NEW MUSICAL. It was also nominated for several Drama Desk Awards and was a finalist for the Pulitzer Prize for Drama in 2014.
With the success of the Off Broadway engagement, FUN HOME officially moved to Broadway the following year of 2015 playing the Circle in the Square Theatre for 26 previews and 582 regular performances. The biggest change for the Broadway engagement was transforming the show from a proscenium stage to now being performed in-the-round. With Sam Gold on board, the cast featured…
Ceveris, Kuhn, Malone, Lucas, Colindrez, and Perez reprising their roles from the Off Broadway run. In addition, the casting also featured….
Tony nominee Emily Skeggs as “Medium Allison Bechdel” (which she originally served as the standby and then took on the role fulltime halfway through the Off Broadway run from Alexandra Socha who departed for personal reasons),
Oscar Williams as “Christian Bechdel”,
and
Zell Morrow as “John Bechdel”.
The Broadway production was well received by critics and audiences everywhere. It went on to receive 12 Tony Awards nominations winning 5 including BEST MUSICAL and BEST ORIGINAL SCORE (for Jeanine Tesori and Lisa Kron – who also made history that night as the first female writing team EVER to win that category).
Following its life on Broadway, FUN HOME toured all across North America back to performing on a proscenium stage. It continues to play around the world including The Philippines, Canada, Barcelona, and Australia.
Along with the success of the stage production, FUN HOME is currently in development of becoming a movie musical. It’s expecting to be produced and starring Jake Gyllenhaal as “Bruce Bechdel along with Sam Gold (the stage version’s director) making his film directorial debut.
Isn’t this such a powerful story?!!!
#TonyAwards #CountdownToTheTonys #NYBTTop50TonyAwardsCountdown #BroadwaysBiggestNight #BroadwaysBack #TheShowMustGoOn
Fun Home Performance Tony Awards 2015 – YouTube