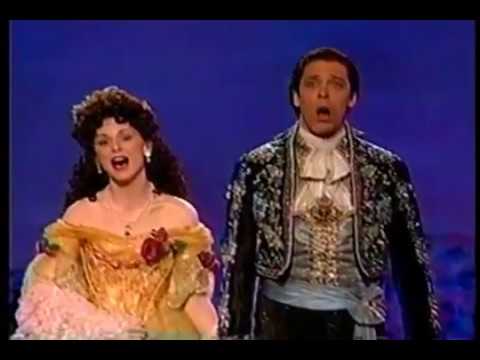 HELLO, BROADWAY FANS! We are just 20 DAYS AWAY till we get to celebrate the return of Broadway’s biggest night and Live Theater. We are talking about The 74th Annual Tony Awards. We have more legendary performances from previous telecasts coming your way on our TOP 50 TONY AWARDS COUNTDOWN. Bring on the showstoppers
At # 20 on our countdown, we experience a classic TALE AS OLD AS TIME like no other. Set in a kingdom right in the heart of France, we meet an arrogant prince cursed and trapped inside the body of a monstrous creature unless he can win the heart of a beautiful girl and earn her love in return. The possibility happens when a smart and intelligent young girl shows up at the castle. We of course are talking about the great classic story of Beauty and the Beast. Based on the 1991 Oscar winning Disney animated film of the same name, the show features a score by Alan Menken, Sir Tim Rice, and the late Howard Ashman and a book by Linda Woolverton. It was the inaugural show that started everything for Disney on Broadway.
From the 1994 telecast, here is the full cast performing a montage / medley of notable scenes and songs from the show consisting of PROLOGUE, ME, BE OUR GUEST, IF I CAN’T LOVE HER, and the Finale reprise of the musical’s titular song.
Beauty and the Beast was first conceived as a Broadway show in 1991 when the original animated film was released. The movie was praised by critics which audiences compared it as if they were seeing a classic Broadway Musical. Even the press itself called it THE GREATEST BROADWAY SHOW IN A MOVIE THEATER! With the response being overwhelming, the Disney team encouraged their former CEO Michael Eisner to give it a try. Even though he did Theater, Eisner was nervous but gave it a try. Transforming the 90 minute cartoon into a full 2 ½ stage musical wasn’t easy. Many questions were asked like…..
How would they make an actor back and forth from a Prince into a Beast?
How do you transform real humans into household objects such as candlesticks, clocks, and teapots?
Luckily by Disney magic, the team came across director Robert Jess Roth, who is a genius at doing spectacular concerts for rock stars. With his previous experiences, he immediately got more inspiration to expand the story. The team found their answers. For the Enchanted objects, Roth and the team came up with an idea that when The Enchantress places the spell on the castle, the humans who get cursed are actually slowly turned into objects as the petals keep falling off the rose. They also came across Jim Steinmeyer and John Gaughan, who is best known for creating unbelievable illusions for David Coperfield in creating many of the show’s special effects.
For the musical, they kept the beloved score by Alan Menken and the late Howard Ashman (who passed away right before the film was released). New to the team included acclaimed lyricist Tim Rice, who helped co-write some new songs in helping expand the story and characters. It took 2 years to develop but the hard work paid off.
BEAUTY AND THE BEAST had its out-of-town world premiere tryout in Houston, TX at the Theatre Under The Stars in the Fall of 1993. It was well received, the production immediately transferred to Broadway in the Spring 1994 where it ran for 46 previews and 5,462 performances. It opened at the Palace Theater before later transferring to the Lunt-Fontanne Theatre. It’s now the 10th Longest Running Show in Broadway History. Under Robert Jess Roth’s direction and choreography by Matt West, the cast was led by….
Tony nominee Susan Egan (later Sarah Uriarte Berry, Kim Huber, Kerry Butler, Christianne Tisdale, Debbie Gibson, Toni Braxton, Andrea McArdle, Sarah Litzsinger, Jamie-Lynn Sigler, Megan McGinnis, Christy Carlson Romano, Brooke Tansley, Ashley Brown, Deborah Lew, and Anneliese van der Pol) as “Belle”,
Tony nominee Terrence Mann (later Chuck Wagner, James Barbour, Jeff McCarthy, and Steve Blanchard) as “The Beast”,
Burke Moses (later Steve Blanchard, Chris Hoch, Christopher Sieber, Patrick Ryan Sullivan, Stephen Buntrock, Grant Norman, and Donny Osmond) as “Gaston”,
Tony winner and the late Gary Beach (later Bryan Batt, Patrick Page, David DeVries, Jacob Young, and John Tartaglia) as “Lumiere”,
Tony nominee Beth Fowler (later Beth McVey, Cass Morgan, Jeanne Lehman, and Alma Cuervo) as “Mrs. Potts”,
and more.
The show went on to be nominated for 9 Tony Awards that year winning only 1 for BEST COSTUME DESIGN (for Ann Hould-Ward).
FUN FACT: One of the musical’s notable songs A CHANGE IN ME (which is the big 11:00 number sung by “Belle” talking about what her life has been since she and “The Beast” became close) was added later into the Broadway run in 1998 when Toni Braxton joined the cast (and made history being the first African American Actress to play “Belle”). It fit so well in the production, it became a favorite of the musical ever since. Later on during the Broadway run the coda was changed to grand higher belt and orchestrations for when Ashley Brown made her Broadway Debut with the show as the 15th Actress ever to play “Belle”, In most productions today, they use the high coda.
Following the success of the Broadway company, BEAUTY AND THE BEAST went on to become a worldwide spectacular family musical. It has played on 6 continents and translated into every major language. For many children, it was their first Broadway show. There were productions everywhere from London’s West End, Australia, Tokyo, Korea, multiple touring companies around the world,
Currently, BEAUTY AND THE BEAST recently launched a brand new company touring in the UK featuring the majority of the original creative team. It includes full updates to the sets, costumes, staging, and a full diverse cast.
Today, BEAUTY AND THE BEAST is still performed in Schools. Community, and Regional Theaters everywhere.
How timeless is this show?!!
#TonyAwards #CountdownToTheTonys #NYBTTop50TonyAwardsCountdown #BroadwaysBiggestNight #BroadwaysBack #TheShowMustGoOn
Beauty and the Beast 1994 Tony Awards – YouTube