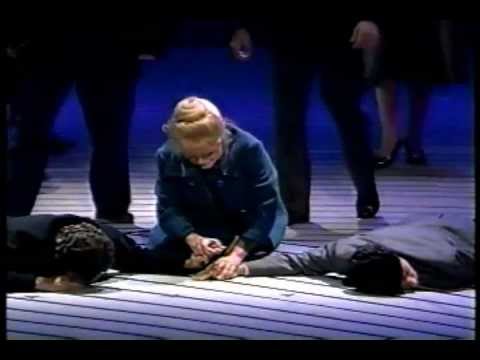 GOOD MORNING BROADWAY FANS! It’s just 41 DAYS till we celebrate Broadway’s biggest night and the return of Live Theater of the year with The 74th Annual Tony Awards. We have more of the most legendary performances from previous telecasts on our TOP 50 TONY AWARDS COUNTDOWN. All of this promises to give you chills and goosebumps.
At # 41 on our countdown is a thrilling musical featuring nature vs nature plot. It follows 2 fraternal twins that were separated at birth, one was raised wealthy and the other poor. The different environments take the twins to opposite ends of the social spectrum. In addition, they both fall in love with the same woman which causes a rift and leads to a tragic conclusion. This is the story of the Johnstone Twins….. Better known as the Blood Brothers. This musical features a score and book by Willy Russell.
From the 1993 telecast, Warwick Evans as “The Narrator”, Stephanie Lawrence as “Mrs. Johnstone”, Con O’Neill as “Mickey Johnstone”, Mark Michael Hutchinson as “Eddie Lyons”, and the original Broadway cast perform a medley of TELL ME IT’S NOT TRUE and SUNDAY AFTERNOON / MY BEST FRIEND,
BLOOD BROTHERS was initially conceived as a school straight play by Willy Russell. It was first performed at the Fazakerley Comprehensive School in Liverpool in 1981. He would later then upgrade the story by translating it into a musical, developing it for the Liverpool Playhouse in 1983. It was a huge success, the production transferred to London’s West End playing the Lyric Theatre for a 5 month run. Under the original direction of Alan Dossor, the cast was led by….
Andrew Schofield as “The Narrator”,
Barbara Dickson as “Mrs. Johnstone”,
Wendy Murray as “Mrs. Jennifer Lyons”,
Andrew C. Wadsworth as “Eddie Lyons”,
George Costigan as “Mickey Johnstone”,
Peter Christian as “Sammy Johnstone”,
Amanda York as “Linda”,
And
Alan Leith as “Mr. Richard Lyons”.
The original production was a modest success. It was nominated and won BOTH its categories at that year’s Olivier Awards for both BEST NEW MUSICAL and BEST ACTRESS IN A MUSICAL (for Barbara Dickson).
The production immediately embarked on 2 National Touring productions in 1984 and then launched a brand new production in 1987. It toured the UK first before returning the following year to London’s West End playing the Albery Theatre (now the Noël Coward Theatre) and later the Phoenix Theatre. This 1988 revival went on to make Theater history as the 3rd Longest Running Show in West End History playing over 10,000 performances closing in 2012. Under the direction of Bill Kenwright and Bob Tomson, this revival’s original London cast was led by….
Warwick Evans as “The Narrator”,
Kiki Dee as “Mrs. Johnstone”,
Joanne Zorian as “Mrs. Jennifer Lyons”,
Robert Locke as “Eddie Lyons”,
Con O’Neill as “Mickey Johnstone”,
Richard Croxford as “Sammy Johnstone”,
Annette Ekblom as “Linda”,
And
Jeffrey Gear as “Mr. Richard Lyons”.
The show featured tons of replacement throughout its long run.
The London revival earned 2 more Olivier Award nominations for its BEST ACTOR IN A MUSICAL (for Con O’Neill) and BEST ACTRESS IN A MUSICAL (for Kiki Dee). However it lost both its categories.
Along with its life in London’s West End, BLOOD BROTHERS went on to become a worldwide smash hit overseas. It included productions in Australia, South Africa, and Czech Republic. It also would later make its way to our New York Theater scene.
In 1993, the London revival production of BLOOD BROTHERS made its Broadway debut at the Music Box Theatre where it ran for 13 previews and 840 regular performances. Under the direction of Bill Kenwright and Bob Tomson, the cast was led by….
Warwick Evans reprising (later Richard Cox, Domenick Allan, and Adrian Zmed) as “The Narrator”,
Stephanie Lawrence (later Regina O’Malley, Petula Clark, Helen Reddy, and Carole King) as “Mrs. Johnstone”,
Barbara Walsh (later Regina O’Malley) as “Mrs. Jennifer Lyons”,
Mark Michael Hutchinson (later Shaun Cassidy and Ric Ryder) as “Eddie Lyons”,
Con O’Neill reprising (later Phillip Lehl and David Cassidy) as “Mickey Johnstone”,
James Clow as “Sammy Johnstone”,
Jan Graveson (later Shauna Hicks) as “Linda”,
And
Ivar Brogger as “Mr. Richard Lyons”.
FUN FACT: The Ensemble features Tony nominees Kerry Butler and Brian d’Arcy James who both made their Broadway debuts with this show.
The original Broadway production of BLOOD BROTHERS was nominated for 6 Tony Awards including BEST MUSICAL. However, it lost all the categories. It did however take home a Drama Desk Award for OUTSTANDING FEATURED ACTOR IN A MUSICAL (for Mark Michael Hutchinson).
Today, there are still productions of BLOOD BROTHERS playing around the world. It has been done in schools, community, and regional theaters everywhere.
How thrilling is this musical?!!