Andrew Lloyd Webber confirms he is bringing his new contemporary CINDERELLA to Broadway!!!

ROYAL NEW: Sir Andrew Lloyd Webber has been making the rounds of press today celebrating the return of The Phantom of the Opera as it re-haunts Broadway tonight. Moments ago while being interviews on MSNBC, the legendary composer confirmed that his new musical adaptation of Cinderella will be coming to Broadway next year!!!
This new Cinderella comes following the success of the show’s debut in London’s West End earlier this Summer. Talks are still being made that the production is expecting to be led by its original London star Carrie Hope Fletcher.
PLEASE NOTE: This is NOT a stage version of the Disney film we love or a revival of the Rodgers & Hammerstein version (that was previously on Broadway back in 2013), This is a brand new contemporary take on the classic story we all know in love. The story is still the same…. a young girl with big dreams who is forced to work as a household servant by her jealous stepmother and stepsisters. One day, an announcement is made for a Royal Ball which the handsome Prince seeks for a bride. However, the stepmother and sisters prevent the household servant girl from attending. Luckily everything changes when the girl has her wish become a reality by her Fairy Godmother. What’s also different about this version is that “Cinderella” is more of a rebel. It also explores very familiar what’s going on in the world today how gender relationships are rethought. Plus, it deals with the critical thematic element concerns beauty shaming. Some of the songs have already become singles including BAD CINDERELLA, SO LONG, ONLY YOU, LONLEY YOU, I KNOW HAVE A HEART, FAR TOO LATE, and more.
This new version was originally developed through a set of readings and workshops at the Other Palace Theatre in May 2019. It was well received that the next steps were to do a full-scale production.
This new CINDERELLA was initially slated to have its premiere in the West End originally in the Summer of 2020. However, it was delayed for a year due to the COVID-19 pandemic. Despite being in quarantine, the company still held continued development labs from home.
Most recently, the show finally premiered in London’s West End at the Gillian Lynne Theatre. Under the direction of Laurence Connor and choreography by JoAnn M. Hunter, the cast was is led by…
Carrie Hope Fletcher and Georgina Onuorah alternating as the title role,
Olivier nominee Victoria Hamilton-Barritt as “The Wicked Stepmother”,
Newcomer Ivano Turco as “Prince Sebastian”,
Rebecca Trehearn as “The Queen”,
Gloria Onitiri as “The Godmother”,
Laura Baldwin as stepsister “Adele”,
Georgina Castle as stepsister “Marie”,
and more.
CINDERELLA originally began previews on June 25th, 2021 under extreme COVID-19 and Delta Variant safety precautions. The show originally was performed at a limited 50% capacity. The show was slated to officially open on July 20th, 2021. However, the plug was pulled after a cast member tested positive for COVID-19. A few days later, it was revealed that the show will go on. The company took a 4 week hiatus and officially had its long awaited Opening Night on August 18th, 2021 earning RAVE reviews and now playing to a FULL CAPACITY.
Along with the production, a full concept album of the musical’s entire score was released on July 9th, 2021. It included its main cast including Fletcher, Onitri, and Turco, it featured an all-star lineup of some familiar faces appearing just for this recording including….
Adam Lambert,
Helen George,
Todrick Hall,
and
Webber’s ex-wife Sarah Brightman
.
We know this version will be getting TONS of buzz during Awards season!!
No word has been said on what Theater the show will run in, the starting time, or casting. Stay tuned.
Who is excited?!!

West End production of Roundabout revival of ANYTHING GOES (starring Sutton Foster) filmed and set to be released in Cinemas next month!!

YOU’RE THE TOP! It has just been revealed that the current limited engagement West End production of the Tony winning Roundabout Theatre Company revival of Cole Porter’s legendary classic Anything Goes has been filmed and will be released in cinemas next month.
The filmed proshot is set to be released in Cinemas starting November 28th, 2021.
Filmed from the stage at London’s Barbican Theatre, fans will experience the DELOVELY toe-tapping performances of this critically acclaimed production that was directed and choreographed by Kathleen Marshall. The proshot will also feature the production’s leading lady Sutton Foster in her West End debut reprising her 2nd Tony winning portrayal of “Reno Sweeney”. Those who also didn’t get to see it in NYC, this is your chance to see this iconic performance.
Along with Foster, the proshot will also include….
Tony and Olivier winning stage and screen legend Robert Lindsay as “Moonface Martin”,
British stage and screen legend Felicity Kendal as “Evangeline Harcourt”,
Samuel Edwards as “Billy Crocker”,
Nicole-Lily Baisden as “Hope Harcourt”,
Hayden Oakley as “Lord Evelyn Oakleigh”,
and
a full 50 piece tapping Ensemble.
This West End revival of ANYTHING GOES has been getting critical praise as one of the many shows helping reopen live theater. It began this past July where it continues to play to packed houses now till November 6th, 2021.
PLEASE NOTE: Foster is currently playing her final week in ANYTHING GOES now through this upcoming Sunday, October 10th, 2021. She is set to sail away back to the states to do a promo tour for her new memoir / craft book HOOKED before jumping back into rehearsals for her Broadway return in The Music Man this Holiday season.
After Foster departs the cast, the role of “Reno Sweeney” for the remainder of the run will be played by Broadway and West End favorite Rachel York who previously also appeared in this revival originating the role of the North American National Tour.
Who is excited?!!
ANYTHING GOES with Sutton Foster coming to cinemas November 28th (filmedonstage.com)

SPECTACULAR, SPECTACULAR NEWS: Last week, casting has officially been announced for the upcoming London company of the now Tony Award winning Moulin Rouge in the West End. Under the direction of Tony winner Alex Timbers and choreography by Tony winner Sonya Tayeh, this new cast will be led by….
Newcomer Jamie Bogyo in his West End debut as struggling and aspiring writer “Christian”,
Liisi LaFontaine (West End’s Dreamgirls) as THE SPARKLING DIAMOND herself “Satine”,
Olivier Award nominee Clive Carter (Into The Woods and Come From Away UK) as the owner & ringmaster of the Moulin Rouge himself “Harold Zilder”,
Olivier Award nominee Jason Pennycooke (London’s Memphis and Hamilton) as head performer “Henri de Toulouse-Lautrec”,
West End favorite Simon Bailey (Jersey Boys and Heathers) as the rich, vain, and abusive psychopathic “Duke of Monroth”
Elia Lo Tauro as the sexiest tango dancer all of Paris himself, “Santiago” aka “The Narcoleptic Argentinean”,
Sophie Carmen Jones (Chicago and Jersey Boys) as the jealous “Nini Legs-in-the-Air”,
and so much more.
Moulin Rouge will CAN-CAN its way overseas to London’s West End at the Piccadilly Theatre beginning November 12th, 2021.
Along with its London company, this Award winning production continues to play to packed houses every night here in NYC at the Al Hirschfeld Theatre. Other upcoming productions will include its long awaited North American National Tour and sit-down Australian companies.
Who is excited?!!!

MARY POPPINS reopens in London’s West End for the first time in 17 months!!

SPIT, SPOT!! After 17 months of being abruptly shutdown, everyone’s favorite PRACTICIALLY PERFECT nanny is back!! The West End revival of Disney’s Award winning stage adaptation of Mary Poppins reopens its run at London’s Prince Edward Theatre tonight.
With anticipation in the air, check out to see what “Mary” herself has been doing leading up to this highly anticipated moment. Here is the production’s Olivier Award nominated leading lady Zizi Strallen as the titular role taking a brief JOLLY HOLIDAY stroll through London before its back to caring for THE BANKS CHILDREN.
We want to wish the full company a happy 1st night back!!!
Break a leg to the full cast, crew, musicians, and creative team.
Who is excited?!!
Mary Poppins 2021 reopening video | “London is Flying Again” – YouTube

DO YOU WANT TO BUILD A SNOWMAN? Preparations in full swing for London company of Disney’s FROZEN 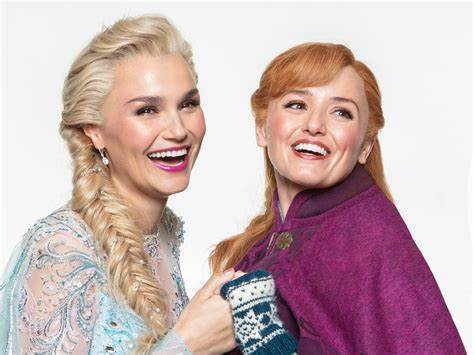 FOR THE FIRST TIME IN FOREVER, Live Theater is back!! The stage adaptation of Disney’s smash hit Frozen is preparing to finally debut overseas in London’s West End this upcoming month. The company is working around the clock in rehearsals. In addition, the magic of ARENDELLE is being built and coming to life is at the show’s new London home at the newly renovated Theatre Royal Drury Lane. Check out this latest time lapse of FROZEN’s London set being built.
FROZEN will get London audiences to LET IT GO at the Theatre Royal Drury Lane. Previews begin August 27th, 2021 and the official Opening Night will be September 8th, 2021.
Who is excited?!!!
Are you ready to BUILD A SNOWMAN?!!!
Frozen in the West End | Set build timelapse – YouTube
« Older Entries